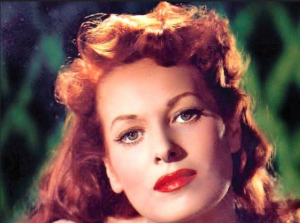 If you ever watched THE QUIET MAN and didn’t enjoy it you’ve had a humour by-pass. I’ve heard it dismissed as stage-Irish. It certainly employed some stars of  the Irish stage, such as Arthur Shields, who had stored his rifle under the Abbey Theatre boards before taking part in the 1916 Rising, itself a hard act to follow. Arthur played the Reverend Playfair, the Church of Ireland Rector, and in real life was of that denomination, as was his brother who went by the stage-name as Barry Fitzgerald. William Shakespeare had something to do with the film also as it was essentially THE TAMING OF THE SHREW moved from Padua and its environs to Connacht.

Feminist critics have, rightly, defended the film and Mary Kate Danaher’s refusal to be pauperised by her brother and beholden to the charity of her bridegroom. In real life Maureen O’Hara showed the same spirit. When she sought American citizenship in the 1940s the US authorities demanded she relinquish allegiance to the King of England. She insisted she had never owed nor given such allegiance, being Irish, and  she fought and won a long battle with the US State Department. The Dublin Opinion had a cartoon of De Valera with a fan’s poster of the star on his office wall.
For me the scene where Father Lonergan’s anticipated landing of a salmon after an epic struggle, is spoiled by Mary Kate’s interruption,  is one of the best ever filmed. But Mary Kate’s choice of confessing as Gaeilge  rather than the more widely understood English, that her bridegroom had, perforce, to sleep in a  Mala Codlata,  displays a wonderful grasp of psychology by the scriptwriter. Though the idea may have come from Ernie O’Malley, the Republican veteran, who was an advisor on the making of the film?
This occurred to me when I read the poet and patriot Padraic Colum’s biography of Arthur Griffith. Colum described the one quorate meeting of a very rum Parliament in January 1922 in Dublin. Ireland had a democratically established Parliament since January 1919. It was called Dail Eireann and owed its origin largely to Griffith’s ideas. But the rum Parliament, purported to be THE PARLIAMENT OF SOUTHERN IRELAND, and its origin was an idea of Ireland’s enemies. It excluded elected members for Ireland’s North Eastern constituencies. It purported, though it had not the authority, to “ratify” Articles of Agreement signed in London by delegates from Dail Eireann. The British Government did not recognise Dail Eireann’s right to exist, much
less ratify agreements. Most of those attending “THE PARLIAMENT OF SOUTHERN IRELAND” were members of Daill Eireann. Padraic Colum stated that more Irish was spoken at that one meeting than was ever spoken on any one day in Dail Eireann. Just as Mary Kate Danaher/Thornton wanted to hide  from the wide world her embarrassment  at denying her bridge-groom his whole entitlement in his marriage-bed, most of those attending the Rum Parliament hid their embarrassment at their acquiescence in the denial of Ireland’s whole entitlement, of a Republic, and in substituting  Saorstat Eireann
in its stead.
Though the TD for Armagh, Michael Collins, was ineligible to attend the the Rum Parliament, he was also TD for a Cork constituency and emerged as Chairman of a  “Provisional Government For Southern Ireland” pending the establishment of Saorstat Eireann scheduled for the following December. While Presiding over this anomalous if not “Irregular” junta, Collins was simultaneously the Finance Minister in the legitimate Cabinet of the democratically established Parliament – Dail Eireann.
(It is whispered also that he was simultaneously Head Centre of the secret and conspiratorial Irish Republican Brotherhood, the main begetters of the 1916 Rising, whose continued existence following the establishment of Dail Eireann, was looked at askance by many patriots. He may even have assumed the Presidency of the Irish Republic vacated by De Valera a few weeks earlier.  When De Valera was elected President of The Irish Republic by Dail  Eireann on 26 August 1921 on the nomination of Sean MacEoin, seconded by Risteard O Maolcatha, MacEoin was acting on the instructions of the IRB. When De Valera resigned the Presidency both of the Republic and the Dail Ministry following the “Treaty” vote ,Griffith was elected to Presidency of  the Ministry, but not the Republic. Before August 1921  De Valera had been President, merely of the Dail Ministry, since April 1919.)
Beggars Bush Barracks in Dublin was evacuated by the British “Auxiliaries” and taken over by Irish troops in 1922, ostensibly subject to Dail Eireann’s Minister for Defence, Risteard O Maolcatha,  and Sean Lemass was one of those troops. When he found out he was being paid from funds not voted by Dail Eireann but by the “Provisional Government,” he severed links with Beggars Bush and  resumed his unpaid IRA membership.
President Higgins has suggested that we take a good honest look at our history, I’m doing my best, like the pianist in the mining town in Montana remarked upon by Oscar Wilde. I trust you will forgive this digression, or, if you prefer, divarsion.
Montana. I’m told, has the highest proportion of people of Irish descent of any State in the American Union, and the commonest name in Butte is O’Sullivan. As the mines there, like those in Arigna, are copper-bearing, they were developed and worked by men from that area of West Cork. Not many miles from Clonakilty and Sam’s Cross, or for that matter, Beal na Blath.
Michael Collins and Tom Hales, who commanded the unit who shot him, and Sean Hales  were all doing their best for Ireland. Those with generous dispositions will give them that recognition and their thanks.