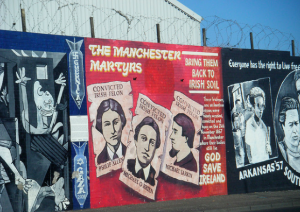 Most people have heard of the Manchester Martyrs, Allen, Larkin and O’Brien, who were hanged publicly in Manchester on November 23, 1867 for allegedly taking part in the rescue of two Fenian prisoners during which a police officer was accidentally shot. They were not responsible for the shooting. Not many have heard of Michael Barrett, hanged publicly in London 6 months later for allegedly causing an explosion at Clerkenwell House of Detention on 13 December 1867. This was a foolhardy operation carried out by some mavericks in a bid to rescue a Fenian organiser. This event in which four were killed caused a huge outcry in England and lost the Fenians much support including the support of Karl Marx who called it ‘a colossal blunder.’

Michael Barrett was a native of the parish of Ederney in Co Fermanagh.  He was the last man to be publicly hanged in Britain on 26 May 1868. He was hanged for a crime he did not commit and protested his innocence to the end. He claimed he was in Glasgow on the day of the explosion. He was found guilty on the basis of allegations made by a paid informer.

Michael was born in 1838 in the townland of Drumnagreshial about three miles from Ederney. At 21 years of age, he emigrated to Glasgow to find work and there he became involved with the Fenian movement. This movement, which received much of its support from the USA, traced its origins to the founding of the Irish Republican Brotherhood (IRB) in Dublin in 1858.

The explosion at Clerkenwell Detention centre in London in which four people died and more than one hundred others were injured took place on 13 December 1867. The British government, under pressure from Queen Victoria, was determined to put an end to the growing demand for Home Rule. Someone was going to be made to pay dearly to teach the Irish a lesson. Michael Barrett was arrested in Glasgow and found guilty in a show trial. He was hanged outside Newgate prison on 26 May 1868 –the last public hanging in Britain.A large crowd gathered to watch the spectacle. They jeered at him and sang ‘Rule Britannia’. Michael was buried inside the prison and remained there until 1902 when along with all the others buried inside Newgate, his mortal remains were removed to a new cemetery at Ilford in Essex. He is buried in plot number 340 in one of 6 graves numbered 42928 -42933.

At the trial in the Old Bailey, the main evidence against Michael Barrett was a statement made by a Patrick Mullany, originally from Dublin, who was a paid informer. Mullany informed the court that Barrett had told him that he had carried out the explosion with another man named Murphy. The evidence of three other witnesses who testified that they knew Michael to have been in Glasgow on the day the explosion took place in Clerkenwell was dismissed by the Attorney General. The jury was out for two and half hours. In spite of the lack of credible or consistent evidence, they pronounced Michael Barrett guilty. The other accused were found not guilty.

During the course of his detention, Michael’s mother walked the long distance from her home near Montiagh to Lisnarick to see Captain Archdale who was the Unionist MP to ask him to intercede on her behalf. His response was: ‘All Fenians deserve to be hanged.’

Before he was led away, Michael spoke about the contradictions in the evidence against him. His speech from the dock is as powerful and as moving as any delivered by an Irish felon facing the gallows.

There were many protests about the sentence handed down. The Daily Telegraph, believe it or not, called for a retrial. In Westminster, John Bright MP and several others also called for a retrial. Prime Minister Gladstone agreed to further inquiries but, under pressure from Queen Victoria and others, the Home Office, accepted the verdict and ordered the public execution for the 26 May 1868. Three days after he was hanged, the Bill outlawing public execution became law.

(Many of Michael’s distant relatives still live in the Ederney-Kesh-Irvinestown area of county Fermanagh.  The Scallons of Irvinestown are a well-known Fermanagh family. The singer Dana married one of them. A campaign is now under way to have the mortal remains returned to his native parish. In two years time, in 2018, it is hoped to commemorate the 150th anniversary of his unjust execution in London.

Another interesting footnote: In 1968, Cahir Healy a well-known local Nationalist politician, wrote a series of articles for the Fermanagh Herald about Michael Barrett. In one of the articles he referred to a family who then lived in Barrett’s home in Drumnagreshial and who were direct descendants. The next week after the article appeared in the Fermanagh Herald the RUC from Enniskillen raided their house. The family told me this themselves.)

6 Responses to ‘Who is Michael Barrett ?’  by Joe McVeigh