By Harry McAvinchey on September 2, 2016 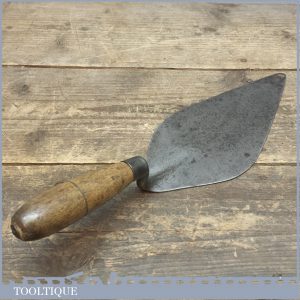 It ‘s a worn old thing now.
I was looking at the bricklayer’s trowel in my hand, once an extension of my father’s own hand and now on this particular day , a pointed extremity of my own.It was one of the few things I inherited from him .He wasn’t really one for amassing material possessions at all, so that when he died there wasn’t much to worry over.He’d spent most of his last ten years suffering from dementia in a care-home and material things were the least of his worries while fighting his final battle with cerebral athrophy. There had been a few books and old photographs; the small ,square sepia kind ,mostly taken on one of those old ,long-gone “Brownie” cameras that had helped a previous generation record the odd ,small increments of lives lived. There is so little of those lives left except in those fragments of memory.In my case, I’d already inherited my father’s few tools some thirty years before he died. He never used them again , having been on building sites since he left school at fourteen in 1933. He began that life by carrying tools and attending bricklayers until he learned the trade himself and became proficient in arts of stone-masonry.. He was in his sixties, around my own age now, when he last used his lump -hammer , bolster and trowel.I have a few photographs somewhere , in an old album of him bending at work on his final bricklaying job. It had been a small thing , in a life previously spent working in war-time London, re-building that blitzed city ,or later, the varied and peripatetic life in Ireland of the stone-mason or bricklayer -for- hire, building stone walls , factory buildings,barns, planetariums ,factory chimneys,elaborate gate-posts or humble houses, churches and cathedrals. He had been well-regarded in that respect and part of a kind of knowledgeable, extensive brotherhood.
His last works were two small projects for me .I wanted him to build a brick fireplace in the home I was building for myself … and finally a brick- barbecue some time later . I had notions at the time that the weather in Ireland would go through a miraculous change and the rains might stop falling during the Summertime to allow us to dine outside a little more.Both of these small jobs were done some thirty years ago and are now both ,long-since gone too , except in other old photographs from a time when my children were very much younger . The fireplace eventually suffered the changes of fashion, to be replaced by an antique cast-iron affair with a slate -hearth ,which I ‘d found in a reclaimation yard , while the barbecue, built from hundred year old ,beautiful ,reclaimed bricks which I’d scavenged from the demolished terraced houses on old Banbrook Hill, where he, my aunts and uncle and my grandparents had at one time lived in the early part of the twentieth century.That barbecue eventually succumbed to the Irish weather. Sadly unused for much of its existence, it was gradually re-claimed by insinuating moss, the constant attack of the frosts and rains and eventually, already crumbling,it suffered the final indignity of being demolished by my wife . She was obviously not in a good mood on that particular day. It was an easy death and would have fallen by itself had it not been pushed.I replaced it with a large garden shed on that same spot.
The trowel I was now turning in my hand had been taken from the shed for possibly its final hurrah in my own hands….although you never can tell.I had finally come around to building that retaining wall beside the oil -tank to replace a rotten fence I’d had to rip out a few weeks ago. Many years later the blade was now worn down like a well-used spade; the edges honed , ground and sharpened by years of use; the handle worn to a smooth burnish.That blade was possibly only two thirds of its original brutish size, but it was now the perfect weight and heft for my own elderly hand. I thought as I shovelled and mixed the sand and cement to make some mortar that there existed a history right there in that trowel and I wondered would it ever be inherited by anyone in the future or would it simply be discarded in some future house-clearance as just some old , worn -out tool and forsaken as much of life eventually is…

View all posts by Harry McAvinchey →
Apres Match’s take on the Irish League ( you gotta laugh)…
‘Catholicism in Ireland today?’ by Joe McVeigh

10 Responses to ﻿﻿THE TROWEL