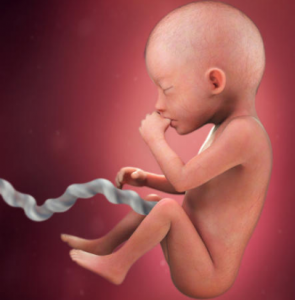 I met a woman I know the other day. “I’ve stopped following you” she told me. I was alarmed – was she stalking me? Hoping I knew the way somewhere? Suddenly aware that my sense of direction is non-existent?

I’ll come back to that.

Last week, one of my daughters-in-law gave birth to a daughter.  Next month, all being well, another daughter-in-law will give birth. Both events were and are looked forward to enormously by all the family – most of all, I’m sure, by the mothers-to-be.

Factoid: In Britain, you can have a legal abortion up to 24 weeks.

The image above is of a foetus/baby at 20 weeks. I feel safe in saying that had someone asked either woman at, say, 20 weeks if they’d considered having their 20-week-old foetus/baby aborted, both women (and their husbands) would have been horrified. So, for that matter, would I.

One way and another not the most cordial of encounters. But an instructive one nonetheless.

So here’s the thing. If abortion of a 20-week foetus is the removal of a non-human, why do many, like my critical woman, believe such images are “uncalled-for”?

One thing’s for sure: the foetus/baby involved didn’t call for it.

72 Responses to A non-following woman and related thoughts