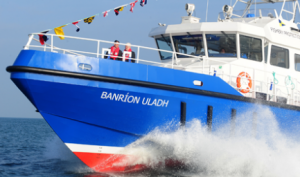 A: I hear they’ve changed the name.

B: Another on-the-run story? Subterfuge and deception?

B: So no on-the-runs. Not even letters to them?

A: Not at the moment. I’m talking about a boat that had a foreign-language name.

B: Property of a sheik, maybe?

A: No, this was a fisheries protection vessel. Michelle Gildernew named it at its launch.

B: And someone has now gone and given it a foreign-language name.

A: Well, yes and no. When Michelle Gildernew launched it she was Agriculture minister, and she called it Banríon Uladh. Irish. Which is native or foreign, depending on which foot you write with.

B: Well I get the Uladh bit. We have that all over the place. Ollscoil Uladh, Raidio Uladh…

A: Not quite. We’ve got Ulster University and Radio Ulster.

B: Those are the foreign names for them.

A: Not according to the DUP. It’s the other way round with them.

B: Other way round? You’ve lost me and I’m afraid to guess.

A: It’s simple. Michelle Gildernew gave the fisheries protection vessel the name Banríon Uladh back in 2010. The present Agriculture minister, the DUP’s Michelle McIlveen, has changed the name to the English translation – Queen of Ulster.

B: What was the point in that?

A: Ms McIlveen says “DAERA (Department of Agriculture, Environment and Rural Affairs ) is a new department with a fresh identity and logo and adopts a single language policy”.

B: How have the Irish language people reacted to this?

A: The Irish language group Pobal says “This is a sad and petty action, which brings no benefit or value to a society struggling to move away from inequality and discrimination”.

B: Strong words in any language.

A: The Pobal woman went further: the Irish language, she figures, “must be protected in strong, comprehensive legislation”.

B: I thought they had already. Irish Language Act, agreed to as part of St Andrew’s Agreement. Right?

A: But the Irish Language Act still hasn’t been passed.

B: Dia ár sábháil – you astonish me.

A: The DUP are perhaps afraid it might lead to confusion.

B: You mean confusing like Radio Ulster referring to the six counties, not nine?

B: Or Ulster University referring to the six counties, not nine, as well?

A: Sort of again. But the thing is, the DUP’s Stephen Moutray has said having an Irish name on the boat might breach law about providing a neutral working environment, and it might also make it difficult to identify the boat in emergency radio transmissions.

B: So it’s really a question of happiness and safety of all at work?

A: The Irish language people don’t see it that way.

B: Was that the real reason for the name-change – to annoy the leprechaun language lot?

B: By the way, do you have to be called Michelle to become Agriculture minister?

A: No. Michaela will also do. Although it might be changed to provide a neutral Stormont environment.

View all posts by Jude Collins →
James Brokenshire and his important role
‘Pastoral or Political?’ by Joe McVeigh

29 Responses to A tale of two names