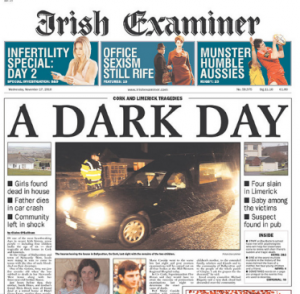 The IRISH EXAMINER (27 September 2016) has a headline –   “City in song and verse – new anthology shows off the best of Cork writing”  –  for a laudatory piece by one  Colette Sheridan for a book launched by the Collins Press  entitled “On the Banks: Cork City in Poems and Songs”  for which they are asking 17.99 euro per copy.

Perhaps the praise is in inverse proportion to the book’s merits and the publishers should not expect to laugh their way to the banks just yet.

It has been compiled by one Alannah Hopkin, who is described as a writer and journalist, born in Singapore but living in Kinsale since 1982. She is the author of two novels, one of which is called “A Joke Goes A Long Way in the country.” It appears that, for a joke, the anthology carries an anonymous verse claiming that Republicans burned down Cork’s Opera House in 1955. The Opera House did burn down that year, resulting from an electrical fault, and in the sixty-one years since then nobody suspected arson by  Republicans or anyone else.

Had anyone suggested, much less asserted, that Jehovah’s Witnesses, Plymouth Brethern, the Orange Order or the Society of Jesus had been guilty of burning the much-loved Opera House down, there would, rightly, be an almighty row. (I pick such communities at random and fro my own experience can vouch for the decency and inoffensiveness of the Witnesses and the Brethren).

So how can the Collins Press and Alannah Hopkin bear false witness and expect to profit by it? How could Colette Sheridan and the Irish Examiner fail to examine their product? Even as verse, the lie about the Opera House is worthless.  But perhaps it has value for certain interests???.

In  March 1920 Crown Forces murdered Tomas MacCurtain, Cork’s Lord Mayor in his own house in front of his family, and their propaganda machine blamed the murder on MacCurtain’s fellow-Republicans. A Coroner’s Inquest laid blame at the feet of the RIC and their political masters, after which the British suppressed inquests.

Central to the British lying campaign was Hugh Bertie Campbell Pollard. He was a man whose jokes could go a long way indeed. And not just in one country, for in July 1936 he flew General Franco from the Canaries to Morocco, the springboard for the General’s jocular revolt and tyranny which lasted for another 39 years. Pollard was not a maverick operator and he remained in Spain as  a British Intelligence Officer in the Madrid Embassy when Franco eventually took over that city.

British Intelligence would have us believe that at least half of all IRA volunteers were on their own payroll. I don’t know what they boast of Irish commentators.

In all seriousness the whole “Intelligence” business is often farcical. Some years ago a small-circulation periodical reported that a prominent commentator had denied that she worked for British Intelligence. Her solicitors wrote to the periodical threatening an action for libel.