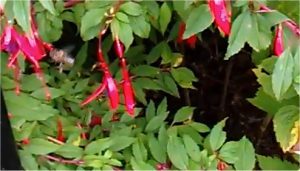 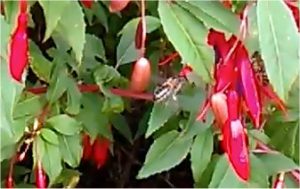 A fuschia waterfall of colour is spilling off the verge onto the road .The good wife is nagging me to cut the bushes back before the neighbours start complaining or if it continues to grow across the road. I shrug it off as best I can. Some things are more important than the neighbours’ momentary ire. “No chance of that for a while yet”, says I .”Look at it . It alive with bees”…and specifically , my honeybees! The honeybees are harvesting the last remnants of local pollen and nectar.It is afire with the fluttering murmur of them . It’s hardly surprising when there is so little else blooming in the garden, now, as the days imperceptibly turn to Autumn. You can feel it in the cool snap of the breeze already. The winds are already beginning to prune the weakest branches on the local trees and they are ripping out the first leaves before the storm- harvests really get under way. I dare say apples will be nearly ready for pulling anytime soon and the children will be throwing sticks into the chestnuts to gather “conkers” .

Now there’s a thought .Playing conkers used to be a seasonal Autumn-time ritual . .. and I even helped my own children to gather them when they were young. The shiny boot-brown polished chestnuts were gathered up in bags and taken home to moulder to green dusty-ness in some forgotten corner. My girls just liked the colour of them. They weren’t too interested in the boyish gamesmanship and the ritual of drilling a hole through the hard nut and pushing a cord or a shoe-lace through the soft mulch inside to go go out and test your conker’s proficiency and hardness in conker-battles against some pretender. Daughter Number Three had also heard that chestnuts helped ward -off unwanted spiders to which she had an unholy aversion .I wonder do children still do any of that in these days of i-Phones .
There’ll be time enough for cutting back hedges when the blooms have been exhausted, I reckoned.I think I’ll take a few fuschia cuttings and plant up some more of these great plants outside my fence . They are fast growers but very easily manageable. The bees seem to enjoy them and the bloom has some longevity throughout the Summer and Autumn.It’s now time to start feeding the honeybees . It doesn’t take a lot of effort . A half hour once a week is all it takes to feed them. I usually make up some sugar-syrup . The easiest method is to pour a couple of bags of white sugar into a stainless steel bowl and shake it level. Then boil up some water , enough to cover the sugar and stir it until it dissolves completely.I decant the sweet syrupy liquid into some two-litre plastic milk cartons and let it cool down .My bee-feeders will usually each take this two-litre quantity of syrup. The feeder is placed above one of the ventilation holes on the crown board, just under the roof of the hive and the bees can find the sweetness and feed from below without me disturbing them. Gravity lets the syrup gently seep downward. When they take all the syrup down, which they’ll usually do within a week , it’s easy to lift the lid and fill it up again. When they eventually stop taking it down , you’ll know they’ve had enough. Sometimes I’ll supplement them with a few bags of sugar or some baker’s fondant, squeezed flat and left just above them .They can nibble away at that too if they need it during the slow dark days of Winter.Sometimes a very weak hive will not feed at all , of course and even though the food is right above the bees they can sometimes simply fade away while seemingly ignoring it.
It’ll also soon be time to add a little insulation under the roof. I made mine from neatly fitting thick polystyrene board encased in thick plastic .It just pops in for the Winter like a thick inner tile and helps them maintain a constant temperature without expending too much energy.So if the rains don’t return that’s what’s on the agenda for the coming week. Things will begin to quieten down in the garden but there’ll still be work to do.