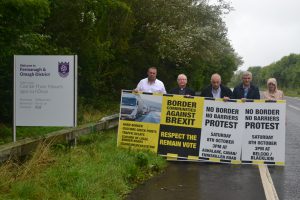 A new group of people from all sectors – business, community, farming, and individuals, calling themselves “Border Communities Against Brexit” have come together out of concern that the North’s remain vote in the recent Brexit referendum, will not be respected.
Spokesperson for the Fermanagh branch of the group, Fr. Joe McVeigh said:

Brexit will have a devastating impact on border communities like ours and that is why we are demanding the British and Irish Governments respect the North’s remain vote. With the end of EU subsidies, farmers will suffer a dramatic loss of income, people’s access to the nearest medical care or ambulance service may be disrupted and opportunities will be lost for students as Northern colleges will no longer have access EU research funding. Not to mention the damage to trade and investment, the end of EU economic support for peace-building and community projects and the already evident currency fluctuations.

“No one who lives in Fermanagh wants to see any of this. We do not want any barriers or borders on the island of Ireland.  For this reason, border communities are mobilising for a major ‘Day of Action’ on Saturday 8th October against any strengthening or reinforcement of the border. There are two demonstrations in Fermanagh – one at the Belcoo/Blacklion border and one at Aghalane Bridge, both at 3pm.

We would encourage as many people as possible, including representatives from all political parties, to take part in this event to oppose the return of a hard border, to stand up for the right of the people in the North to remain within the EU, and for the votes of the people of Fermanagh to be respected.”

This campaign was launched  by Fr Joe McVeigh at Aghalane Bridge on the Fermanagh/Cavan border. There will be a Day of Action along the border on Saturday 8 October.

View all posts by Jude Collins →
THE TRAGIC STORY OF THE O’HAGAN FAMILY, CO TYRONE by Joe McVeigh
‘Fr Charles O’Neill and the Foggy Dew’ by Joe McVeigh