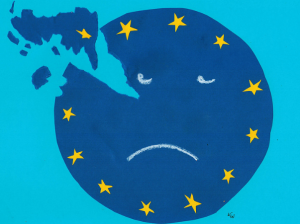 After the BREXIT vote a friend of Ireland’s re-unification remarked: This changes everything! Perhaps. But having observed   Ireland’s conflict for some time and how much British bias and arrogance, United States ignorance and the Irish governments resignation have plagued   resolution, I was not optimistic. Let me posit a few recent examples which inspire my pessimism.

So back to BREXIT. In 1918 all of Ireland voted by 73% to 27% for an independent Ireland. Despite the majority England chose to make a minority into a majority by carving out for itself a sectarian statelet called Northern Ireland.  Today, after a N. I. majority vote to remain in the EU, some leaders see their future being re-united with the 26 counties which are in the EU. England’s Prime Minister May sees majority rule for N. I the old way: minority rule with force of arms. She dismisses as nonsense any talk of a ‘Border referendum’ because …well…because she is Prime Minister.

Since the narrow acceptance of Ireland’s partition, Ireland’s leadership has acted with a kind of timidity and acceptance of British deceit and malevolence. Of BREXIT Foreign Minister Flanagan said only “…to mitigate these losses and minimize the damages.” You can sense the resignation. Whether it was the anti-Catholic persecution in the North, toleration of British Army bombings of Dublin, spying from Cheltenham, leaks from the nuclear plant at Sellefield or punishing economic policies , Ireland seems to be afraid to speak up in the United Nations or America. Speaker O’Neil when begged by activists to do something about British Army and loyalist violence captured this problem responding: “What do you want me to do be more Irish than the Irish government?” This malaise can be explained by the Stockholm or Battered Spouse Syndromes. After centuries of unspeakable British crimes , cultural castration, violence and brainwashing, Irish leaders have bonded with their persecutors and act as if powerless to resist. How else can one possibly explain a Memorandum of Understanding with the British Army which virtually spits on the sovereignty of the Irish nation and people?

The United States, home to many of the descendants of those victimized by Britain’s cruelty in Ireland, exhibits a profound ignorance of Britain’s ability to manipulate the “special relationship.” Politically motivated extraditions, subpoenas (Boston College)and   persecution of refugees like MacAllister by our State and Justice Departments suggests ignorance AND complicity in Britain’s lawless actions. No wonder the first post-BREXIT action of PM May was to dispatch Minister of Trade  Liam Fox to Washington and the Wall Street Journal. America’s cooperation or assistance should come with a price. If a U. S. visa to Gerry Adams can launch a peace process; and a speech by President Reagan can crumble a wall and reunite Germany then perhaps BREXIT and a new U. S. President will enable the reunification of Ireland.

Michael J. Cummings, a native of Springfield, Mass., is a graduate of St. Anselm’s College (B. A., 1968) and New York University (M. P. A., 1970) and a former member of the National Boards of the Irish American Unity Conference (1996-2013),   the Ancient Order of Hibernians (2001-2008), and the Irish Northern Aid Committee (1988-1996). He served six National AOH Presidents, 5 IAUC National Presidents and two National Chairman of INA primarily in public relations capacities.   He is the only person to serve on the national policy making bodies of all three major Irish American organizations.   He also served on the Commission on Peace and Justice of the Roman Catholic Diocese of Albany. He served 36 years with the State of New York including as Assistant Deputy Comptroller. Cummings has appeared on American, English and Irish television and radio and his commentary and letters and those of the Presidents have appeared in major American, Irish-American, and Catholic print media. He is a frequent columnist for the weekly IRISH ECHO newspaper.

View all posts by Jude Collins →
‘Fr Peter McVerry SJ -a voice for the voiceless’ by Joe McVeigh
‘The auld Irish Sod’. By Randall Stephen Hall

4 Responses to BREXIT CHANGES EVERYTHING? by Michael J Cummings