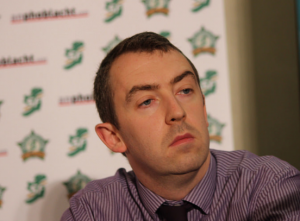 It’s the best of times because…Well of course –  the sight of Daithí McKay crashing and burning because of trying to teach Jamie Bryson how to talk. Not just that, but eighteen Sinn Féin members in North Antrim walking out of the party and publicly announcing their total dissatisfaction with the party and how it’s run, especially in terms of their man Daithí. I mean Yeee-haaa!

Sinn Féin under pressure, Sinn Féin losing members! There are high fives all round in the Dublin circles where Sinn Féin is seen as a bunch of northern gangsters, down here in our country codding people into voting for them. And high fives in Belfast and parts of Derry too. Military discipline my arse! It’s all coming apart at the seams! Oh joy oh rapture, that we have lived to see this day!

“I don’t believe he should allow that [acting as a sacrificial lamb] to happen. He should consider spilling the beans. Otherwise, he will go down in history as a silly boy who consorted with a loyalist to bring down the democratic political leader that his party was in government with”.

Did I forget to mention that Pat is a former Sinn Féin MLA? How silly of me.

“For the sake of his own credibility and personal worth, Daithí McKay should come clean with all he knows about the Nama coaching controversy. I don’t for one second entertain the idea that he decided, on his own, to school Jamie Bryson”.

Did I forget to mention that Davy is a former Sinn Féin MLA? How silly of me.

“The leadership hate democracy and they hate dissent. They will be raging at these resignations. They will worry that it will also embolden others in the party to strike out”.

Did I forget to mention that Anthony is an ex-IRA man who helped set up the Boston tapes affair that interviewed anybody involved in the conflict as long as they got a headache at the thought of Sinn Féin? How silly of me.

And you could – should you so choose – have a look at the words flowing from the pen of Suzanne Breen, with article headings like “Daithí McKay urged to ‘spill beans’ on Sinn Féin role in Bryson coaching probe” and “Ex-SF man at centre of Nama storm is urged to reveal all” and “It’s likely McKay is far from happy…he may not be prepared to go quietly”.(Yes, Virginia, Suzanne has a very fertile pen.)

Did I mention that Suzanne needs to retire to a darkened room  should she accidentally stumble on an image of Gerry Adams? How silly of me.

16 Responses to Daithígate: the best of times or the worst?