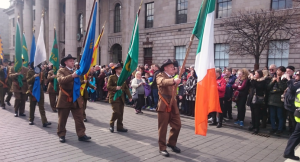 The Irish Examiner carried an Opinion piece by Maurice Manning taken from his address to the Parnell Summer School. He (Manning) criticized SF for hi-jacking the centenary commemorations for their own agenda. I believe he thought that the Reclaim the Vision parade was a SF initiative, which it wasn’t. I was on the committee which organised the event and it was totally non-party political. Of course there were many SF members in attendance, which was to be expected. I responded to the Examiner but not surprisingly they didn’t carry my response. I then turned my response into the piece. I was also on the 1991 75th anniversary commemoration which we named Reclaim the Spirit of 1916 along with Robert Ballagh when the government ignored the event. We brought about 25,000 on to the streets. That event was also non-party political. I thought it was worth including in my piece. So this article has not appeared in any other publication. – Tom Cooper

Speaking at the Parnell Summer School in Rathdrum in Co Wicklow former TD and Senator Dr Maurice Manning, chair of the Expert Advisory Group on Centenary Commemorations said the 2022 commemoration of the Civil War will be “a huge test of our national maturity and our capacity to face up to a difficult past”. By making this statement it seems Dr Manning has found fault with the manner in which the citizens of Ireland have celebrated the centenary commemorations of the Easter Rising. The public response to calls to honour the heroes of 1916 was overwhelmingly positive and Ireland’s citizens, at home and abroad, celebrated the Rising in a dignified, mature and appropriate manner.  This response, which attracted massive crowds, was widely regarded as a spectacular success. There was, however one exception. The citizens of Ireland were appalled, angered and insulted by the bizarre and degrading proposal by government to mark the 1916 Rising by commemorating those who died lighting the flame of freedom in 1916 alongside those who fought to extinguish it.

When the government launched its commemorative programme in the GPO, the centrepiece was a video presentation entitled ‘Ireland Inspires’ that literally airbrushed the men and women of 1916 out of history in the very location where they made history.  No images of the signatories of the Proclamation were on display; the founding fathers of our nation ignored as if they had never existed, as if the Rising had never taken place. Instead we were presented with images of Queen Elizabeth II, David Cameron, Paisley, Bono and bizarrely Brian O’Driscoll. The public reaction was one of disbelief and disgust forcing the government to abandon its own programme of events. Plans to issue invitations to senior British royalty were also abandoned as relatives of those executed leaders threatened to boycott the State commemorations. Once again the state disgustingly diluted its commemoration of those who won us our freedom by proposing they share their moment of glory with those who had debased them. The offending video was immediately replaced and instructions issued to devise programmes that might be more in tune with public opinion.

Disgusted by the state’s inept and insulting proposals to mark the centenary of the Rising many relatives and ordinary citizens supported an initiative called “Reclaim the Vision of 1916”. This initiative was the product of a small group of volunteers with very limited resources who devised and presented a programme of events culminating in a parade and pageant which brought more than 40,000 people to central Dublin. “Reclaim the Vision of 1916” was a civil society group of artists, academics, trade unionists, community activists, journalists and other interested citizens who believed Ireland could be reinvigorated by the ideals of the signatories of the Proclamation. The festival, held on April 24th 2016, was its sole initiative. Members of “Reclaim” were a diverse and disparate group of individuals with a specific focus, to commemorate the men and women who participated in the Easter Rising which was ultimately to lead to the freedom and Independence we enjoy today. Its chairperson was the artist Robert Ballagh.

The government reluctance to commemorate the centenary of Easter 1916 had precedence. In 1991 the FF/PD coalition bowed to pressure from unrepresentative groups who were ideologically opposed to Irish separatism and shamefully ignored the 75th anniversary of the Easter Rising. The reason given by the then government and opposition parties for ignoring this historically seismic event was that to do so would show disregard for the sanctity of human life, yet, as we have witnessed during this centenary of commemorations, those who opposed commemorating the Easter Rising in 1991 had no problem commemorating the unparalleled slaughter of millions during the Great War.  In saving Ireland’s honour and soul Robert Ballagh, on a non party political mission, organised a citizens initiative to commemorate the 75th anniversary of the Rising and the people responded magnificently in their tens of thousands. This initiative was called “Reclaim the Spirit of 1916” and citizens from every corner of the country converged on Dublin to pay tribute to those who gave their lives for Irish freedom. The idealism and bravery of those women and men who punctured the colonial bubble was remembered with pride by their peers to the shame of the political parties in Leinster House.

It was anticipated that a similar if not larger crowd would attend the 100th anniversary parade and those behind the initiative were not to be disappointed.  “Reclaim the Vision” was a non-party political group which acted with an independence of thought and action and was solely for the purpose of honouring the sacrifice of 1916. This was truly a citizens initiative. Contrary to suggestions from Maurice Manning ‘Reclaim’ was not an alternative to the government commemoration, indeed, citizens were encouraged to attend the State event. However, it was felt that the ordinary people of Ireland should be given the opportunity to partake in a citizens commemoration in a tangible way by means of direct participation in the events of the day. Patrons and performers of “Reclaim” included Panti Bliss, Stephen Rea, Fionnuala Flanagan, Adrian Dunbar, Donal Lunny, Damien Dempsey, Don Baker, Frances Black, Laoise Kelly, Sibéal Ní Chasaide. This truly people’s event unashamedly celebrated the 1916 Rising and urged all to work towards its vision of ‘a republic of equality and opportunity with nobody marginalised and nobody left behind’. Parade participants, included representatives of Ireland’s new communities, travellers, residents of Direct Provision, disability and women’s groups, former Clery’s workers and groups including Right to Water, Shell to Sea and a host of others.

Not surprisingly there were also calls to jointly commemorate those British soldiers who died in attempts to prevent the Rising. In a provocative and obsequious episode of commemorating our “shared history”, members of the Dublin and Wicklow Loyal Orange Lodge and the Reform Group laid  a poppy wreath on Mount Street Bridge in Dublin in remembrance of members of the British army killed opposing the Easter Rising.  In a further display of provocation an Orange Order spokesperson stated that the British soldiers involved in opposing the Easter Rising at Mount Street “didn’t know the political situation in Ireland as they had just landed in Kingstown”. Such repugnant and servile revisionism represents the very worst characteristics of toadyism to the British Empire.  As part of what revisionists call our “shared history”, there are now calls for the erection of a permanent joint memorial on Dublin’s Mount Street Bridge to the British soldiers and Irish Volunteers killed in 1916. Heather Humphries, Minister for Arts, Heritage and the Gaeltacht, astonishingly indicated that consideration would be given for such a memorial.  Calls for us to venerate and commemorate those who ruthlessly suppressed the Easter Rising is both insulting and demeaning to the memory of those who gave their lives for Irish Independence

There is now also an annual commemoration in Glasnevin Cemetery marking the ending of the Royal Irish Constabulary and the deaths of all police officers killed during 1916 and the War of Independence. This is carrying political ecumenism a step too far. One cannot honour the RIC without also honouring the Black and Tans and Auxiliaries who were an integral element of policing in Ireland during the 1916-1922 period. This is a considered affront to all who suffered appalling abuses from this group of uniformed thugs in the service of the Crown. It should not be forgotten that it was the Royal Irish Constabulary who fired indiscriminately into the crowd in Croke Park on Bloody Sunday in 1920 killing 13 innocent spectators and the Tipperary player Michael Hogan.

Would the British government memorialise at the London Cenotaph the countless Irish rebels killed in Britain fighting for Irish independence?. British soldiers killed enforcing colonial rule around the world are not commemorated by the former colonised. Those killed fighting the Mau Mau are not commemorated in Kenya. Indeed, as the recent apology extended by the British government to Kenya for the brutality inflicted on the Mau Mau during their war for independence demonstrates, it is now common for the British to make apologies and reparation for their past colonial atrocities. In Ireland, bizarrely, we have calls to honour and memorialise our former colonisers. It appears the legacy of our colonial experience has left us with a warped sense of nationhood. It also seems that decades of revisionism and propaganda with the specific purpose of incrementally deconstructing the narrative of the Irish state and the restoration of a British dimension to Ireland, are finally bearing fruit. This obsequious pussyfooting around the Easter Rising by the Irish state seems to suggest it is ashamed of its own revolutionary past.