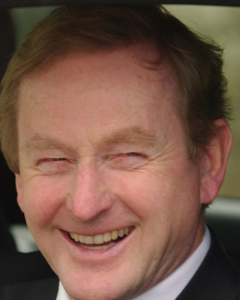 Do you remember that day shortly after the Brexit vote, when Enda Kenny suggested the forming of an all-Ireland forum to manage the fall-out from Brexit? There was a line of North-South politicians standing alongside him, notably Arlene Foster. The DUP leader quickly rubbished the need for such a forum with a briskness  Thatcher would have approved of. Sure hadn’t we loads of cross-border bodies of all kinds – and couldn’t the north and the south pick up the phone at any time? Exit in some confusion stage left, one Taoiseach.

There can have been few watching that televised exchange who didn’t see it as a fairly blunt snub to Enda.  Martin McGuinness  made it clear that Sinn Féin didn’t think anyone (aka Arlene Foster) should have a veto on the matter, but the snub stood.

This morning on RTÉ, Sam McBride of The News Letter was asked if  it had been a snub. I was in the shower at the time but as best I could hear over the splashing sounds, Sam told Audrey Carville that, no no no, this wasn’t a throw-back to the 1970s DUP, where any suggestion of working with Dublin was anathema, and sure hadn’t Arlene said they had telephones and other links?

Um, point of order,  Sam. If it waddles like a veto and quacks like a veto, it is a veto.

But now we learn that Enda is going to go ahead with the All-Ireland forum thing. Certainly that’s what the Irish Times heading says: ‘All-Ireland forum on Brexit to take place in November’. But then when you go down the article a bit, it trnspires that Enda is for holding “a conversation” about Brexit.

I’m not sure what Arlene Foster’s real thoughts are about Brexit – I thought she looked a bit shook as she emerged to first speak about it – but clearly little has changed from the 1970s. There may be cross-border telephone calls, but DUP voters are being fed a diet which they presumably are glad to gobble up: to wit, we’ll have as little to do with that shower in the south as possible.

Will Enda Kenny stand up against this airy dismissal of his idea? I’d like to think the day in November will result in Enda sprouting a backbone, but it’d go against decades of deference to northern unionism. How long can Enda or other southern politicians depend on a make-the-north-go-away philosophy resonating with the southern electorate? Maybe not as long as Team Enda would like.