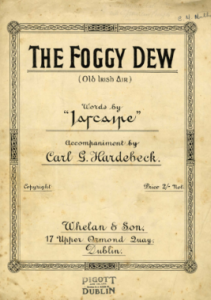 Only recently I discovered that the author of the 1916 song ‘The Foggy Dew’ was a priest in the Diocese of Down and Connor, Father Charles O’ Neill who was  a native of  Portglenone.  He was born in 1887 and died in 1963 and is buried in Newcastle, co Down.. To find out more about him I turned to Wikipedia. This is a summary of what I learned about him. Fr O’Neill, served in St Peter’s parish in Belfast and later was parish priest of Kilcoo and then in Newcastle, County Down.

“The music is from a manuscript that was in possession of Kathleen Dallat of Ballycastle. That manuscript gives Carl Hardebeck as the arranger.It is the same air as the traditional love song The Moorlough Shore(recorded by John McCormack in 1913. )This song chronicles the Easter Uprising of 1916, and encourages Irishmen to fight for the cause of Ireland, rather than for the British, as so many young men were doing in World War I.

“Approximately 210,000 Irishmen joined up and served in the British forces during the war. This created mixed feelings for many Irish people, particularly for those with nationalist sympathies. While they broadly supported the British war effort, they also felt that one of the moral justifications for the war, “the freedom of small nations” like Belgium and Serbia, should also be applied to Ireland, which at that time was under British rule.”

In Easter week 1916 Connolly and Pearse led their soldiers out and occupied several key buildings in Dublin city including the GPO. The British moved in and bombarded the buildings killing many and arresting the leaders.

The rebellion was quickly put down by British forces, but the execution of the leaders that followed, marked a turning point for many Irish people. The public revulsion at the executions added to the growing sense of alienation from the British Government.

“Fr O’Neill was reflecting the sense of alienation after the British executed the Leaders of the 1916 rebellion when he wrote The Foggy Dew. In 1919.  He attended the first sitting of the new Irish Parliament, known as the Dail. The names of the elected members were called out, but many were absent. Their names were answered by the reply “faoi ghlas ag na Gaill” which means “locked up by the foreigner”. It had a profound effect on O’Neill and some time after this he wrote the Foggy Dew. The song tells the story of the Easter Rising but more importantly, it tries to reflect the thoughts of many Irish at the time who had come to believe that the Irish who fought for Britain during the war should have stayed home and fought for Irish independence instead.’

Fr O’Neill sums up this feeling in the lines: ‘Twas far better to die ‘neath an Irish sky, Than at Suvla or Sud el Bar.”

The lyrics of this haunting song are cleverly written:

As down the glen one Easter morn to a city fair rode I
There Armed lines of marching men in squadrons passed me by
No pipe did hum, no battle drum did sound its dread tattoo
But the Angelus Bell o’er the Liffey’s swell rang out in the foggy dew

Right proudly high over Dublin Town they hung out the flag of war
‘Twas better to die ‘neath an Irish sky than at Suvla or Sud-El-Bar
And from the plains of Royal Meath strong men came hurrying through
While Britannia’s Huns, with their long range guns sailed in through the foggy dew

Oh the night fell black, and the rifles’ crack made perfidious Albion reel
In the leaden rain, seven tongues of flame did shine o’er the lines of steel
By each shining blade a prayer was said, that to Ireland her sons be true
But when morning broke, still the war flag shook out its folds in the foggy dew

‘Twas England bade our wild geese go, that “small nations might be free”;
Their lonely graves are by Suvla’s waves or the fringe of the great North Sea.
Oh, had they died by Pearse’s side or fought with Cathal Brugha
Their graves we’d keep where the Fenians sleep, ‘neath the shroud of the foggy dew.

Oh the bravest fell, and the Requiem bell rang mournfully and clear
For those who died that Eastertide in the springing of the year
While the world did gaze, in deep amaze, at those fearless men, but few,
Who bore the fight that freedom’s light might shine through the foggy dew

As back through the glen I rode again and my heart with grief was sore
For I parted then with valiant men whom I never shall see more
But to and fro in my dreams I go and I kneel and pray for you,
For slavery fled, O glorious dead, when you fell in the foggy dew.

(An Assessment of ‘The Foggy Dew’ by Dr Lucy Collins a lecturer in English at University College Dublin (UCD). The power of song to capture, as well as to instil, political conviction is clear in ‘The Foggy Dew’. Set to the tune of an existing lament, this text expresses personal grief for the dead revolutionaries of 1916 by situating them in a long verse tradition of devotion to beloved and country. The ‘strong men’ of Meath are pitted here against the British long-range guns, showing mechanised warfare to be morally defeated by the integrity of individual action. Written just three years after the Rising, the song articulates a vision for the rebels’ lasting renown, in keeping with the deification of key revolutionary figures by this time. Easter imagery combines religious and natural force in support of the song’s argument: that the heroes of 1916 will live again through the sacrificial power of their actions, while those who fought in the Great War will remain buried in foreign fields, forever lost in the anonymity of false allegiance.)

The song (also sometimes known as “Down the Glen”) has been performed and recorded by most well-known Irish folk groups, including The Clancy Brothers and Tommy Makem, The Dubliners, The Chieftains, Shane MacGowan and the Wolfe Tones among others.

Sinéad O’Connor provided the vocals for a mournful version of the song on the Chieftains’ 1995 collaboration album The Long Black Veil which was voted “Best Duet” by BBC Radio 6 Music. (This version is also played often before a concert by Dropkick Murphys.) On 11 July 2015, she sang a live rendition of the song forConor McGregor’s entrance at UFC 189 in Las Vegas, NV.  The Italian Epic Metal band Wotan in their second studio album Epos. Alan Stivell on the “Olympia” live album (1972), and the “Again” album (1993) (including Shane MacGowan’s backing vocals).Daniele Sepe with his Italian jazz group included Foggy Dew in his album “Spiritus Mundi” (1995), among many other protest songs from all over the world, with the voice of the Finnish singer Auli Kokko.The song “Livin’ in America” by the Celtic rock band Black 47 is played and sung to the tune of the Foggy Dew. Serbian band Orthodox Celts on their second album The Celts Strike Again. Houston-based Celtic rock band Blaggards on their 2005 album “Standards.”Croatian band Belfast Food on Live in Rijeka. German Celtic metal band Suidakra on the album “Lays From Afar” (1999) as the album closer. It features only the first verse.Alaska based Celtic rock band Fire on McGinnis covered it on their debut album Fire on McGinnis (2012).The Screaming Orphans on their album Sliabh Liag (2013).Pete Seeger recorded this song with his own lyrics, calling it “Over the Hills”.Gilles Servat in a duet with Ronnie Drew, in Servat’s album Sur les quais de Dublin (On the Quays of Dublin) (1996) including a verse written by Servat The Wallace band, Russian folk rock band, album “Volosataya banda is back”(2011), song named “Iz proshlogo son”, a poetical translation to Russian by M.Nizhegorodov, Odetta did a version in the early 1960s, now available on YouTube.