By Harry McAvinchey on September 7, 2016 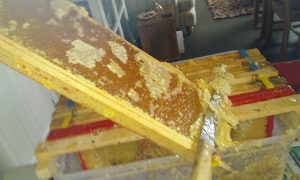 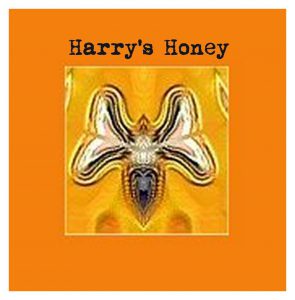 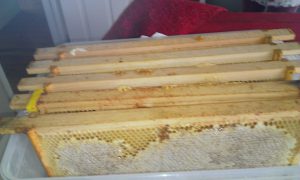 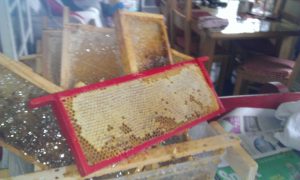 I suppose five stings wasn’t too bad , all things considered.I blame a momentary compulsion on my part. I could have simply been patient and waited. Two honeybees managed to sting me twice on the right arm, just above my gauntlet.It’s funny how they know exactly where to strike the most vulnerable areas. Another angry one stabbed me in the middle of my chest through the heavy cotton material of my suit and the final , most sensitive strike was just beside my left-nipple.The dear knows what it would have been like had I not been wearing my veil and bee-suit.
The first week in September is traditionally the time for the honey-harvest and I’d been holding out for that particular tick to tock.It’s only another few days , I was thinking.If the bees haven’t capped their white wax over the honey by then ,that’ll be my last chance.In that one particularly big, thriving hive they appeared to be slowly working towards that end over four “super” boxes, above the “brood” boxes, when I looked last week.Today it was August Bank Holiday Monday and the fuschias were abuzz with every kind of bee.” The sun was as high as a(n) elephant’s eye” as the mellifluous Gordon MacRae once goldenly emoted ,while sitting astride his big dun horse ,parting and wading through some mighty ,corny but delightful ,corn while the rising music stirred up rhapsodies in his beating heart. So I thought it might be a good time for a bee-inspection before the harvesting time , proper .There was just that stretch of fencing to finish painting first and then I’d suit- up and light the old smoker.
When I opened the big hive, standing some seven feet high, it was quickly evident that the honeybees had been really very busy in the past seven days, somehow possibly knowing that the season was drawing to a close and this might well be their last honey-gathering hurrah before the season turned and the leaves began to wither.Bees are obviously very attuned to the intricacies of nature, the movement of the planets and seasonal change. They are the original sun-worshippers and they know exactly where that shining orb is even when the skies are lambent or heavy with cloud. They’ll know how the days imperceptibly and subtley , shorten ,as the earth spins further from the sun. They’ll always know how to orient themselves to its perpetual gaze and use it to geometrically steer a homewards course. They were doing it a billion years before sailors figured it out.
The boxes were even heavier than last week.White , sweet-smelling wax gleamed across the frames and these were heavy with honey and black with still hard -working motile bees.I noticed that the bees’ colouring was gradually getting darker and their yellow stripes seemed more subdued .The original Buckfast bee-strain was obviously mutating gradually with prolonged contact with the local Irish bees.Maybe that was why this particular queen seemed stronger and possibly more adjusted to the local environment than any of her predecessors. At this point I could have said to myself that I could fit a clearing -board and wait for a day or two and simply lift off those boxes and carry them off. A “clearer board” is ,just as its description describes,is like the normal top-board under the hive -roof ,which has two holes in it to allow air -circulation and possibly feeding . In the clearer-board version , into those holes are fitted two one-way “bee-valves”. These little spring-loaded implants allow the bees to leave the honey boxes but do not let them back in…they can waddle through the narrow entrance much like going through airport security, but they can’t return so they will be isolated below-stairs.This is fitted below the honey box .A day or two with a clearer-board leaves you with a honey- box, empty of bees ….in theory …There may still be the odd lazy little beggar who doesn’t want to leave.
That might be the sensible thing to do but sometimes my compulsiveness gets in the way of the sensible action.As in this case.
There were a few things on my mind anyway: would the weather be as good later in the week? ; would the rains come back for another week or more? ;what about that delivery of blocks , sand and cement I had ordered and that little bit of bricklaying I wanted to undertake beside the oil-tank?; then there were the fellows coming around to inspect the solar- panels….so many things…? Why wait? , I thought. Do it now and get it done and gone!! That’d be the ticket. I knew it would take the better part of a day to harvest the honey so I made the immediate decision to get on with it there and then .I already had my breakfast, hadn’t I? That was the start of a particularly intense two days.
To begin with , I had to separate the various boxes as quietly and as carefully as was possible, hopefully not getting anyone too excited . So each time I took a box off the main hive, I initially covered each exposed box with my home-made “manipulation” cloths. I’d made these a few years ago from a couple of old towels with a dowel -rod attached to each side by a row of tacks to weigh the sides down . I hadn’t used them much in the past but they were perfect for this job , keeping the sunlight off the opened boxes and hopefully fooling the bees into thinking that the roof was still on their particular section of the hive .The cloths kept everything dark and the heat inside fairly constant . Well….that is the theory!!

View all posts by Harry McAvinchey →
‘The auld Irish Sod’. By Randall Stephen Hall
Peter Weir and the Big One

17 Responses to IT GETS STICKY