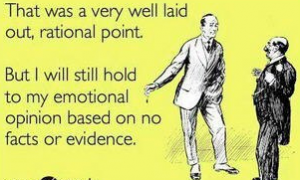 The immediate occasion of this blog is an exchange (civilized, yes, Virginia) with Gio yesterday; the issue more generally is one that I find myself thinking about more and more. It is: are radio phone-ins,  TV studio debates and blog-sites areas for the exchange of views and developed thought about topics, or bear-pits which are at their most successful when filled with yells and dull thuds? In other words, can a column or an argument advanced over the airwaves change minds?

More and more I’m coming to think they cannot. I’ve been running this blogsite for around eight years now, with daily blogs written by me and others (by the way – could I appeal again to regular commenters to accept my invitation to develop their thinking in the form of a guest blog?). In all that time I don’t believe anyone has said “Mmm – I hadn’t thought about that. Good point”. On the contrary – the reaction invariably is to attack the last speaker or to say “That’s just what i think too”. People have a position and reading the blogs here or listening to Nolan or TalkBack appear to make no difference.

Why do they read or listen, then? I think I find the answer over fifty years ago. When I was interned in St Columb’s in Derry as a boarder, we had to struggle with many facets of life, with boredom a major one. So when a couple of boys began to beat each other up, the cry would sound “Fight! Fight!” and we’d swarm to wherever the bust-up was, so we could watch and enjoy. I think it’s the same here – we enjoy a good argument, but we pride ourselves that the argument hasn’t changed our thinking in any way.

That seems to me a pity. I think interest in public affairs and politics are vital in a proper democracy. Everyone should be interested in what’s happening at government and international level. But if we come to each event with no intention of budging an inch in our thinking, mightn’t we be as well employed going to the circus or the movies, or playing the latest computer game?*