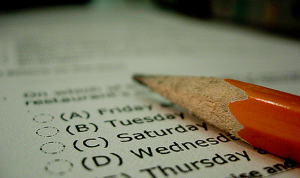 All right, children – sit up straight, arms folded, pay attention. My name is Peter Weir and I’m in charge of all the schools in Ulster. Since you are the people who will be mainly affected by the plans I have, I want you to be the first to know what they are. Everyone listening?

First of all, I’m going to encourage schools to discover who are oranges and who are lemons.  That means in your last year here in primary school – maybe even your last year and a half – you’ll be doing lots of practice tests so you’re ready for the Big One when you get to P7. What is the Big One? Tbat’s the exam that lets us adults know if you’re an orange or a lemon.

I know some people say that if the Big One tells us who’s an orange and who’s a lemon (two-thirds of you will be lemons, by the way), what’s the point in having practice tests – the Big One will tell us what you are and no amount of practice tests will change an orange into a lemon. Well, I want you to know we see the problem there but we in the Democratic Unionist Party are working on it and when we can think of a good reason, we’ll let you know.

Now I must tell you that not everyone thinks the Big One is a good idea. On the British Mainland, for example – that’s England I’m talking about – the government under that nice woman Mrs May, they’re planning to bring the Big One back there as well. But like ourselves – I mean us in the DUP – Mrs May has enemies who don’t want to have the Big One brought back. A man called Alan Millburn, who’s in charge of the government’s social mobility commission – that’s the group that checks whether people can become big shots if they really really try – Mr Milburn says bringing back the Big One would divide schools into Us and Them. He says richer people are much more likely to pass the Big One and so show themselves to be oranges, than poorer people are. And another man, Sir Michael Wilshaw, who’s the Chief Inspector of schools there, says that bringing back the Big One will mean grammar schools – that’s the school where oranges go – will be “stuffed full of middle-class kids. Only a tiny percentage- 3% – are on free school meals”. And Sir Michael has said also that to bring back lots of grammar schools – that’s the kind of school that oranges go to – would be “tosh and nonsense”. He says very few children from poorer homes will pass the Big One and become oranges . Most poorer children will discover they’re lemons, which is a bitter thing to find out.

And sadly, there are some people here in Ulster who say that it’s children whose parents don’t have much money – they are the children who are failing in our schools at present. And some people say bringing back the Big One here will be a step back into the past, will make things even worse. Well what I say to them is, what’s wrong with the past?

The past gave us 1690, when we had – hands? – that’s right, children, the Battle of the Boyne. The past brought us the Signing of the …anyone? That’s right, the Ulster Covenant in – anyone? Little boy at the back? Quite right, 1912. Well done. And the past brought us a Protestant parliament for a Protestant people, and I’d like to see the person who would deny that that was a Very Good Thing.

You see, children, many adults today sigh and wish we were back in the Good Old Days, when everyone had a good time on the Twelfth of July,  the bands marched wherever they wanted, and Catholics were content with their lot and cheered as loud as anyone when the Kick The Pope bands went past.

So, children , if your parents are among those who sigh for the Good Old Days, we have good news. By bringing back the Big One, we’ll help restore the clear marking line between oranges and lemons, between Smart People and Stupid People, between people who make lots of money and people who have hardly any. That’s the natural way in which God has arranged for things to be, so who are we to try and twist things in defiance of the Almighty? Some earlier Ministers for Education, especially Sinn Féin ones, did try to act against God’s plan, but I’m happy to say they were resisted, and they will finally be defeated once we get the Big One up and running for everyone.

So when you go home this evening, children, I want you to tell your mammy and daddy  that the Department of Education is back in safe hands, DUP hands. That we’re going to arrange for lots of time to be spent in schools doing practice exams, so when you come to do the Big One in P7, you’ll be able to give it your best shot. Yes, it’s true that no matter how hard you try, two-thirds of you will discover you’re lemons, and that  can be a bitter experience. But I promise you, in a short time you’ll get used to it and when you grow up, you’ll know your place and you’ll be a lot happier.

So thank God, we’ve got rid of the anti-God notions that were being promoted by some previous Ministers of Education. They wanted to make everyone smart, but sure we know that’s impossible and when people try to twist education to make it happen, they only make God sad. Or even angry. So what is the message you should bring home this evening? It is that God’s in his heaven and all is – or very soon will be – right with the education world.

Now children, if you’d just stand, we’ll sing the first two verses of God Save The Queen….No I did not say two verses of God Help Us All. This is our national anthem and it’s about saving Her Majesty, not about helping us all.

All together then: “God save our noble Queen…”

42 Responses to Peter Weir and the Big One