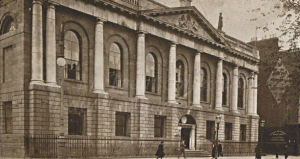 Although the Republic of Ireland Act which ended all remaining constitutional roles of the British monarchy in relation to this state was signed into law in 1948, there are still many reminders of colonial rule in our everyday life. Probably foremost of these is the issue of Irish institutions which still retain the ‘royal’ prefix in their titles more than 90 years after independence. One possibility is that some of us are still suffering from a potent inferiority complex or perhaps we are afflicted with the Stockholm Syndrome.  Either way, despite being an anti-monarchist, I have a sneaking respect for these organisations with “royal” prefixes like the Royal College of Surgeons, the Royal Academy and the Royal Eye and Ear Hospital, and recognise the valuable contribution they make to Irish national life, particularly the Royal National Lifeboat Institution. The fact that they have a “royal” prefix is merely a residue of our colonial past and has no political significance. I do however make one exception to Ireland’s royal patronage. I refer to the decision taken by members of the Curragh Golf Club at their annual general meeting in 2013 to restore the ‘royal’ prefix to their title. Records show that the club was granted the title ‘Royal’ in September 1910 by King George V. The ‘Royal’ Curragh golf course, a plain of over 4,700 acres vested in the Minister for Defence, is adjacent to the military barracks and the Captaincy of the club has been shared bi-annually between civilian and Irish military members since 1922. The self-conferring of this ‘royal’ title is an attack on the republican and egalitarian ethos of this state and the fact that the Irish Defence Forces were party to the re-introduction of this royal prefix undermines their republican ethos.

There are, however, other aspects of Irish life, such as the supine position adopted by the Irish state in the matter of titles and honours being awarded to Irish citizens by the British monarch as if they were her own British subjects. I see this as an issue of fundamental political principle and of far more significance than outdated, irrelevant “royal” prefixes. The Irish Republic is a sovereign state that has repudiated monarchy and therefore the awarding of imperial titles on its citizens is repugnant to our Constitution. To allow this situation to continue amounts to no less than a surrender of sovereign control over State ceremonial to our former colonial masters. Not only is this practice an infringement on Irish sovereignty, but also an attack on the republican and egalitarian ethos of Bunreacht Na hÉireann. The awarding of these ‘titles of nobility’ must be seen as part of the cultural re-incorporation of this state into the British sphere of influence and one must question the motives of those who accept such archaic badges of post-colonial subservience. This is an open display of contempt for the sovereignty of of the Irish state. By accepting these awards and titles from Queen Elizabeth, the recipients become, objectively speaking, part of the British establishment. Inexplicably, successive Irish governments have remained silent on this issue throughout.

This is not a case of petty, mean-spirited anti-British rhetoric, it is an issue of fundamental political principle. My views on these awards are no different to those of Canada, a country that has been a most loyal member of the Commonwealth. Because Canada is not a republic, Queen Elizabeth II is head of state. Nevertheless, when it comes to matters of citizenship and sovereignty, Canada takes a very firm line. Despite the British ancestry of most of Canada’s population, no Canadian may accept a British knighthood or peerage unless he/she first renounces their Canadian citizenship. Conrad Black, the billionaire newspaper mogul, prior to being sent down, was forced to consider renouncing his Canadian citizenship in order to accept a peerage and take a seat in the British House of Lords. The then Canadian prime minister Jean Chretien accused the British government of insulting Canada, stating such titles were “not compatible with the ideals of democracy as have been developed in Canada”. It is my view that the Irish state should adopt the same policy as Canada in this matter and any Irish citizen who accepts these archaic badges of post-colonial subservience should be denied the privilege of Irish citizenship and be obliged to surrender their Irish passport.