This week we have another splendid photograph by Antrim Lens. Here’s how he describes it:

“Spent Sunday in the fields sitting under an oak tree dressed in my ghillie suit, when this buzzard passed by. It had a good look at me and then landed in a nearby tree and watched me for 2 or 3 minutes before it launched into an attack on me, thinking I was food. I had to stand up and remove the hood from my suit to let it know I wasn’t going to be its dinner. My best encounter with a buzzard ever. Realistically it couldn’t see me in the long grass but it could see the black camera body and lens moving in the grass and thought it was a small animal.” 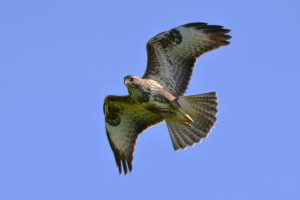 This second photograph I took with my iPhone when my wife and I were on a two-month house-swap in Murcia, Spain. I was sitting on a bench along the promenade and people of all sorts were passing by, some hurrying, some loitering, some stopping to talk. I took a lot of shots with the phone but this one’s my favourite. The fact that the man is cycling right to left makes it more against the visual current (cowboys used to chase Indians – or vice versa – from left to right). And I like the way man and dog are each in their own absorbed world. 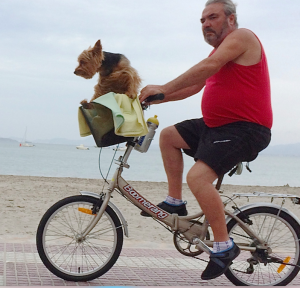 [Come ON, people!  You know you’ve got some terrific shots on your phone, in your camera, in a box. Do share them – they’re always interesting and I’m sure other visitors to this site will appreciate your contribution. – Jude]

And finally: a picture with a story. This from Jim Conway: “This is reputed to be the grave of the angry wife, in Shankill graveyard Lurgan, with what is the one of the shortest epitaphs, the one-word inscription TACET. Supposedly Latin for ‘She speaks no more’ “. 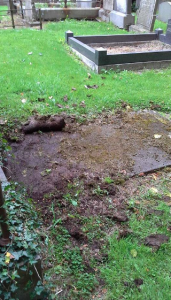 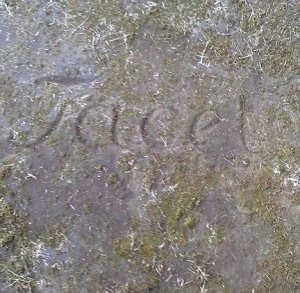 View all posts by Jude Collins →
‘Revisionist myth, propaganda and fabrication’ by Manus O’Riordan
Jaw-jaw is better than war-war – but thinking is better than both

4 Responses to Saturday pic(s) of the week