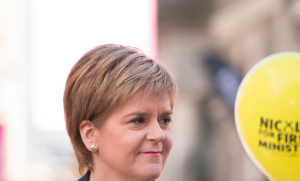 The other reasons the SNP are in the news is that they’re planning an away-day of all their MSPs, MPs and MEPs. Angus Robertson, the party’s Westminster leader says that “all of us need to get our trainers on and door-knock for 2017 and beyond”.

As to the slump in oil prices, which of course has delighted the Remain in the UK people, even without any revenue from oil, Scotlad’s GDP is less tha 1% lower than the rest of the UK. And while Scotland is glad to have any oil income, “the Scottish economy is much bigger than the oil industry and there are lots of areas that will benefit from lower oil prices”. That’s the UK premier economic think-tank, the Frase of Allander Institute, quoted in the Financial Times.

One final point on Scottish oil. In 1974 the McCrone Report state that North Sea oil would have made an independent Scotland the second richest country in Europe. Both Conservative and Labour governments in Westminster quietly filed the report away and Maggie Thatcher used the oil revenue to destroy the coal industry. Wouldn’t it have been interesting if the McClone Report had been widely available to Scottish people at the time?

There are two matters regarding Scotland that need to be kept in mind and that we could learn from. First, many Scots have come to realize, particularly in the light of the BREXIT vote, that England doesn’t give a damn about their welfare. The second is that through the Scottish independence referendum, the Scottish people have had a focused, detailed look at what independence might look like. A majority voted to stay in the UK. But the +5% who need to be won over are far from immoveable. That’s why the Scottish independence movement, instead of collapsing after the independence referendum was lost, is gaining more ground by the day and why, in Angus Robertson’s words, they’ll be getting their trainers on for 2017 and beyond. They know that personal financial gain isn’t the only thing that matters to the Scottish people.

Isn’t it time we adopted some of their optimism and strategies?

14 Responses to Scottish independence: dead in the oil and water?