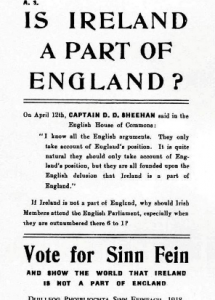 On 29 August 2016 my BLOG “HISTORICAL LETTER FROM HISTORY IRELAND” carried a letter of mine published in that magazine in MAY/JUNE 2009.

It is a detailed letter covering the General Election Results in Ireland in 1918, previous general elections, the phenomenon and significance of uncontested seats, and municipal, county council and other local elections in 1920, and much more..

I sent it to the blog to scotch the objection that Sinn Fein got only 47% of the votes cast in Ireland, ignoring the 25 uncontested seats, and suggesting Sinn Fein’s victory was somehow hollow.

That objection had recently been made here by “MT” and I believe that he made it in honest ignorance.

A few months earlier it had appeared in the Sunday Independent under the name of Eoghan Harris. I don’t believe Harris is an ignorant man……..