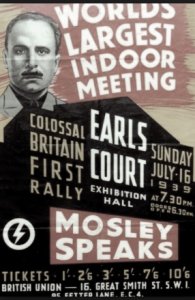 The 80th Anniversary of the Battle of Cable Street in East London will be commemorated on Sunday 9th October. The Irish in London will be taking part, just as in 1936 there was a large Irish dimension.
In 1936 Oswald Mosley’s Fascist Blackshirts attempted to march through an area with a large Jewish population in a coat-trailing exercise .  The Fascists had the approval of THE DAILY MAIL and the protection of London’s  Metropolitan Police, and the Jewish residents were left by polite society to defend themselves. But other inhabitants of London came to their defence, including a large number of dockers, mainly Irish or of Irish origin.
Those dockers were repaying a debt, for during a dock strike in 1912, many Jewish families, themselves rich in spirit but poor in the eyes of the respectable, took in and fed the dockers’ children.
With your permission may I sketch the context?
In September 1935 Jews in Germany were deprived of their citizenship under the Nuremberg Decrees. And in July 1936  General Franco, was flown  by British Agent, Major Hugh Bertie Campbell Pollard, from the Canary Islands to Tetuan, Morocco, whence he launched his anti-democratic tyranny over Spain. (Pollard was no less revolting than Franco, and in 1920 was one of Britain’s most dishonest propagandists in Ireland, and the apparent model for many of today’s leading commentators.)
Anyhow that’s the wider context for the plight of London’s East End Jews in 1936. And as La Passionara
roused Madrid’s citizens with the vow “No Pasaran” – the Fascists shall not pass – so too it was decided
that the East End would not accommodate Mosley’s thugs, whatever the Metropolitan Police might think.
Part of the dockers’ contribution to the defence of Cable Street was to use pickaxes to dislodge “setts”
or cobblestones, to build barricades. Other defenders armed themselves with ballbearings and marbles
to throw on the streets if police on horseback charged them. I suppose some people now campaigning
for the revival of fox-hunting (and others ready to fight to have the ban remain) will be shocked at such
disregard for dumb animals, and relatively unmoved at the threat posed by the Blackshirts, but that’s
by the by. Mosley’s thugs, even with police protection, were unable to force their way through Cable
Street.
On Sunday 9th October the 80th Anniversary of the Anti-Fascist victory at Cable Street will be celebrated in London. The demonstration will start at 12 Noon at Altab Ali Park, Whitechapel folllowed by a rally at
St George’s Gardens on Cable Street. Speakers will include the 100 year old Dublin-born Max Levitas, a veteran of the battle and still very active in good causes. His brother Maurice, who died in 2001, was a veteran of the International Brigade in the Spanish Civil War.
Other speakers with Irish connections will include  Donegal-born Tony Donaghy, currently President
of the Connolly Association and formerly President of the RMT Union,  and Frances O’Grady, Secretary
of Britain’s Trade Union Congress.nThe Mayor of Tower Hamlets John Biggs, Julia Baird of the Jewish Socialists’ Group, Sarah Sackman of  the Jewish Labour Movement, Gerry Gable of Searchlight Research Association and Jeremy Corbyn MP will also be speaking.