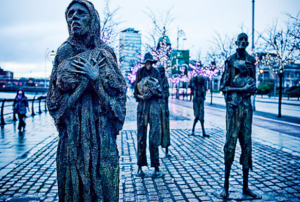 In this “Irish Times” coverage, Fiach Kelly reports the President as follows: “The Irish Famine, he said, “was more a series of mistakes” and was “not providence”.” This is the opposite of what he had in fact said: “Famine was never only an accident of nature. It was more than a series of mistakes. It was not Providence.” He further stated: “It is unfair, I believe, to take the view of Edmund Spencer, who in 1582 had suggested the need for a new population in Ireland, one that would shed its nativism, and to transpose this view onto those who were responding to the Great Irish Famine of the mid-19th century. It is possible, however, to discern the shades of such a view in the invocation of the Famine as an act of Providence. An even more extreme version of this was invoked in response to immigrants arriving in ports in Britain, which suggested that Providence required that the fleeing Irish die where the Famine had afflicted them, in their own areas, rather than migrate as carriers of disease…” “We must also be aware of how the treatment of the Irish Famine changed as one year succeeded another: the first identification of the crop failure in 1845 was different to 1846 in terms of policy response; the rhetoric as to Providence became a central feature of the discourse in 1847; and by 1848, in response to the William Smith O’Brien revolt, we have cartoons presenting the Irish as ingrates towards those who are saving them.” And again: “Isn’t some of the rhetoric invoked today similar to what in the worst periods were the opinions of the London ‘Times’?” RTE News carried this last sentence in its 2 pm bulletin, but by the 6 pm News, RTE had edited out the President’s reference to the London “Times”. See http://www.president.ie/en/media-library/speeches/recalling-remembering-and-learning-from-the-great-famine-1 for the full text of the President’s address. _______________________________________________ Aubane mailing listAubane@heresiarch.org http://heresiarch.org/mailman/listinfo/aubane_heresiarch.org

View all posts by Jude Collins →
AUTUMNTIME
BREXIT VOTE – SHOULD I BE REJOICING? by John Patton