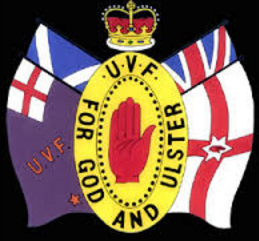 On 7 August 1994, Kathleen O’Hagan (aged 38 years) was shot dead by the UVF in her home near Creggan, Carrickmore, County Tyrone. Kathleen was seven months pregnant. Her other four children witnessed the killing. Her husband Paddy was out that night. The UVF claimed the killing. It was three weeks before the IRA ceasefire.

In September 1994, one month after Kathleen’s murder, I spoke to Paddy O’Hagan. This is what I wrote after that meeting:

“Paddy O’Hagan is still trying to come to terms with the brutal killing of his wife, Kathleen, and their unborn child, one month ago. The UVF claimed that they killed her and stated that they would have killed her husband also if he had been there that night. That is why Paddy is still afraid. Her murder, in front of her five children, shocked the whole community in Creggan and Carrickmore. Kathleen was seven months pregnant.

I talked to Paddy in his home in Brackagh South on the main Omagh to Cookstown road about 10 miles from Omagh. ‘I am still afraid,’ he said. ‘That is why I got these metal doors put on. The children, five boys, aged from one and a half to seven, do not understand. They keep asking me why I put on this metal door. They had a horrific experience. They heard their mother screaming as she was shot dead in the bedroom…I came home that night and they shouted to me that ‘bad men had come and they shot Mammy.’ I was shocked when I saw her lying on the floor of the bedroom and the child in the cot beside her hysterical. I gathered up all the children and went in the car for help.’

Paddy is now calm and reflective. He has tried to reassure the children that they are safe and that Mammy is now in heaven. ‘It is not easy for me to be around the house all the time. I was always an outdoor person. Kathleen did most of the housework. The three oldest boys are back at school and we have a woman looking after the other children during the day. I hope the children will be getting counselling. Social Services were out to see me about it. I would like it soon.’

Paddy found great support from the neighbours in Greencastle and Creggan and from the many letters from people of all creeds. Many who were themselves bereaved as a result of the conflict wrote to him to sympathise. Their messages were great – and the neighbours calling to the house helped me a lot.

Paddy says there are many unanswered questions about the killing of his wife, Kathleen. He is adamant in his belief that there was collusion between the Crown forces and the loyalist killers. The British army and the RUC were often about the house. Six years ago, they wrecked the house which I had just built.’

We were a very happy family. Now I have to carry on for the sake of my children. It is tough but I must do it for their sake. I hope the ceasefire leads to justice and an end to the killings.”

When we finished talking Paddy was going off to his sister’s house to collect the children. They had gone there after Mass to play with the other children.

On 19 August 1997, Tomas, the youngest child of the O’Hagan family, who was an infant when Kathleen was killed, died tragically in a fire in a shed beside their house. He was 4 years of age. I attended the funeral in Brackagh in the same church in which Kathleen’s funeral Mass was held in 1994.On 11 March 2002, Paddy O’Hagan died of a heart attack, almost eight years after his pregnant wife, Kathleen, was shot dead by the UVF. He and his wife, Kathleen, who lived in a new bungalow, had been subjected to constant harassment by the British army and the Royal Ulster Constabulary. I was called to their house on a number of occasions after the RUC raids on their home. On one occasion the RUC from Omagh destroyed their home by drilling the floors and walls with pneumatic drills. They arrested Paddy and took him to Gough Barracks in Armagh city for five days during which he was tortured before being released without charge. I made a formal and official complaint. It was not the first time Paddy had been arrested and tortured.

The eldest son, Patrick O’Hagan, who was only five when his mother was killed in front of him, suffered a nervous breakdown.

This family have depended on the support of some good neighbours and family relatives. It is a shocking story and it still upsets me. Nobody was ever charged with the horrific murder of Kathleen and her unborn baby.

16 Responses to THE TRAGIC STORY OF THE O’HAGAN FAMILY, CO TYRONE by Joe McVeigh