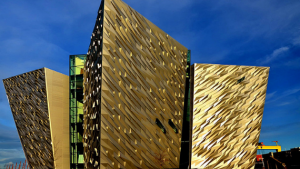 The Titanic Centre in Belfast has surprised me. Even the briefest look at the building tells you a lot of time, thought and expense has been invested in it. Frankly, I couldn’t see how visitor interest in the Centre would recoup the investment. I was wrong. The number of visitors has been huge, those visiting have been very impressed by what they’ve seen, and now the Centre has been voted Europe’s Leading Visitor Attraction at the World Travel Awards. As The Belfast Telegraph headlined it, “Titanic Belfast beats Eiffel Tower, Colosseum and Buckingham Palace”. The award has generated discussion and congratulation in the media generally, with happy consideration of the merit of the award and why the Centre was so popular.

It has always struck me as odd to the point of eccentric that a city would celebrate the making of a ship that sank on its first voyage. What is being celebrated – the workmanship? The effort involved in creating the ship? The Titanic is most famous for having hit an iceberg and sank. Whatever else the workmanship of Belfast offered, it clearly didn’t provide iceberg-proof ships.

This awkward fact – we made it, then it sank- has been steered around carefully in the Belfast story of the Titanic. But an even more glaring omission has been the make-up of the work force that build the Titanic. William Crawley put the question succinctly in his Will and Testament blog on 6 March 2012:

“Why was this shipbuilding feat completed by an overwhelmingly Protestant workforce? This answer to that question… remains a deeply troubling one: Catholic workers were very often excluded from the workforce because of their religion. Some [radio guests] spoke of ‘clear outs’ of those Catholics who were employed at the shipyard. One even said the clear out was so comprehensive that we might properly regard Titanic as itself Protestant”.

Mark Doyle, in an article titled “Don’t Mention The Iceberg” for the British Scholar Society also emphasized the canker of sectarianism in the Belfast shipyards:

“July 1912, during another period of Home Rule excitement and just three months after the Titanic’s doomed voyage, Protestant workers assaulted dozens of Catholic workers at the Harland & Wolff shipyards and elsewhere, forcing 2500 Catholics to flee their work. A few years later, after the First World War, returning Protestant servicemen expelled Catholics who had moved into skilled jobs in their absence. There were renewed expulsions during the partition riots of 1920-22 and again in 1935, in the depths of the Great Depression.”

A similar lop-sided system operated until the end. When the shipyards closed in 1999, of the remaining 1745 shipyard workers, just 69 were Catholic.

So forgive me if I don’t join in the high-fiving celebration of Titanic workmanship or the history of its construction. Like so many other areas of life here, sectarianism ran like an underground sewer which nice people prefer not to talk about, maybe even think about; and those who do talk about it are denounced as – yep, you got it, Virginia – sectarian.