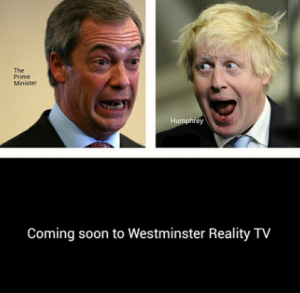 As with Ulster-Scots before the Good Friday Agreement, I’d never heard of a soft border or a hard border before the Brexit vote. Now everybody’s talking about it and not everybody is in agreement with everybody else.

Why is that? Well, it’s a bit like believing in democracy for Northern Ireland. When the Brexit vote showed that we in the north (and Scotland) had voted Remain but the UK as a whole had voted for Brexit, it raised some uncomfortable questions. Martin McGuinness and others tried to object to having the north pulled out of the EU in the teeth of its obvious opposition to that happening’  Arlene Foster said rubbish, the vote was a UK-wide vote, not one where sections like N Ireland or Scotland determined the outcome. Which is exactly what Carson and his henchmen demanded in 1912: the UK as a whole might want to give Ireland Home Rule, but Ulster (later two-thirds of Ulster) insisted that this was undemocratic, given that Ulster (later two-thirds of Ulster) clearly wanted to stay in.

There are two ways of getting out of this contradiction. One is to somehow twist the argument so that for Brexit, the north’s views are irrelevant, but with Home Rule the north’s views are crucial. The other is to ignore the glaring contrast and keep repeating that this was a UK-wide vote.

The hard border-soft border is a bit like the UK’s claims, now that it has committed to leaving the EU. Being in the EU meant access to shared markets; the price for that was the free movement of people throughout the EU area. Now, the UK claims that somehow, although it’ll no longer be a member of the EU, the UK will be able to have access to the markets of the EU and still be able to decide who comes in and who stays out of the UK. Various major voices in the EU have assured Britain that no such thing is going to happen, yet the claims go on being made. Shades of 1984.

But back again to the hard border/soft border. James Brokenshire was on Good Morning Ulster (or two-thirds of it anyway) this morning, reassuring Chris Buckler that there’d be a soft border, no impediments in the way of the ‘common travel’ arrangements between the UK and the south of Ireland, which have existed since long before either Britain or Ireland joined the EU. When Buckler pressed him on how this would work, Brokenshire lapsed into generalities. He’s not alone. People have risen from the political grave to explain how the soft border will work.

People like former Taoiseach Bertie Ahern. People might be asked to produce their passport, but there’ll be no question of searches or questioning of individuals, the  Fianna Fail man insists. How you’ll keep people out of the UK without questioning or searching, Bertie hadn’t time to explain.

In the end, the UK has two alternatives. One is to establish a hard border here in Ireland, with check-points and passports and questioning and searching. Not good news for business but one way of keeping unwanted immigrants out of the UK. The second is to say you’re guarding the UK from illegals, but in practice to abandon the north of Ireland. Well, no, not abandon. The UK will get the south of Ireland to do all sorts of checks to see that no illegals are getting out of Ireland into the UK.

Still with me? Don’t worry, Virginia, my head hurts too. In essence it’s either Britain in Ireland, making sure the border is high-walled and well-manned, or it’s Britain leaving Ireland to do the heavy who-are-you-empty-your-pockets stuff – to do the doorman work so Britons can sleep easier in their beds, confident that they won’t be wakened by a tsunami of immigrants bursting into their bedrooms.

“WAKEY! WAKEY!
‘Ireland and the War against ISIS’ By Donal Lavery

31 Responses to BREXIT IN IRELAND AND OTHER CONTORTIONS