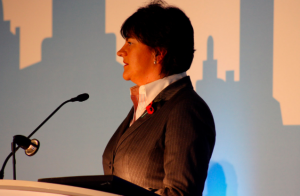 “Pure bitterness!” a friend commented after watching First Minister Arlene Foster’s DUP conference speech. You know, the one where she accused southern politicians of ‘poaching’ firms and companies from the north, in the wake of Brexit.  The only ones with a hard border, she said, were southern politicians who carried a hard border in their heads. She, in contrast, welcomed southern visitors coming north to spend their euro.

I think my friend was wrong to characterise Mrs Foster as bitter. Bitterness is a luxury which politicians normally don’t indulge in, at least on television.  They may or may not be bitter, but they are happy to display bitter characteristics  when they think it’s politically advantageous. The alarming thing about Mrs Foster’s speech was that presumably it was seen as something that’d go down well with the DUP’s electorate.

You may at this point be leaning back in your chair, scratching your skull and murmuring “Now where have I heard that before?”  Let me help end your memory-chasing.  You heard it from Ian Paisley. The Big Man himself. Paisley’s entire career was built on injecting fear into the unionist population here. They must of course be afraid of the power of Rome, which was hell-bent on using its jesuitical wiles to pervert the thinking of good Protestants. What’s more, the power of Rome was exemplified and made incarnate just down the road in the south of Ireland. Given half a chance, the Popish hordes of the south would swallow up the beleagured north and make holy water compulsory in every household.  OK, maybe not every household. Just in public buildings.

So Arlene is treading a  well-beaten path when she warns her followers of the danger from the south. And of course like Paisley, she claims that the south is speaking out of both sides of its mouth. On the one hand it appeals to all parties to come together to cope with Brexit – an appeal that the DUP promptly and publicly rejected. On the other hand, the south sends its emissaries throughout the world to ‘poach’ firms who really should be going to the north of Ireland.

It’s a hard thing to say but in nearly twenty years, since the signing of the Good Friday Agreement, unionist politicians appear to be stuck in a time warp of churlishness and siege-mind. How much longer nationalist / republican Ireland can keep on extending the hand of reconciliation must surely be limited. You want to know how bad things are? Yesterday, even the south’s Minister for Foreign Affairs looked and sounded pretty fed up with Arlene’s accusations. And no, Virginia, he doesn’t look like that all the time.

The truth is, the south’s IDA does a much better job of encouraging foreign investment than its northern counterpart, InvestNI. Maybe that’s what Arlene was really trying  to cloak.  Is she bitter? No, not really. Just better as a follower of unionist opinion than a shaper of it.

View all posts by Jude Collins →
THE BRITISH EMPIRE: A MOSTLY BENIGN RULE? by John Patton
Failing to question and falling down on the job

48 Responses to Arlene and That Speech