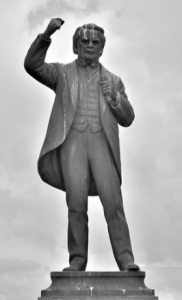 David Lloyd George was known by one and all in his day as able and ruthless and a shameless liar.  So all of what he said should be cross-checked with other sources. So far as I know, and I am not a historian,  much less a distinguished one, the following remarks of his on March 31st 1920 were not challenged at the time nor refuted since:

“If you ask the people of Ireland what plan they would accept, by an emphatic majority they would say:’We want independence and an Irish Republic.’  There is absolutely no doubt about that.The elected representatives of Ireland now, by a clear, definite majority, have declared in favour of independence – of secession.”

” The General Election in Ireland was treated on all sides as a plebiscite and admittedly Sinn Fein swept the country.”

Between the December 1918 General Election and Lloyd George’s March 1920 statement Irish voters had ample time to revise their opinions but in the Municipal elections in January 1920 their support for Republicanism had grown stronger.

In June 1920  the County Elections, Rural District Council Elections and Elections for Poor Law Guardians, if anything, further testified to the veracity Lloyd George’s statement quoted above.

Remarkable how “revisionist” commentators seem never to have noticed those local elections and their significance!  Could it be a cat’s got  eyes and their tongues?.