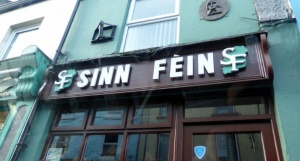 We all know that Enda Kenny is soon to exit the front bench theatre of Free State politics, but this rotten Fine Gael-led Government that seems totally  incapable of stepping up to the challenges facing the population is only on life-support at the benevolence of the establishment-wing of Fianna Fáil. The faded flags of the Civil War have been diluted enough to embrace a status quo consensus of: Keep the Shinners/Left Out!

If truth be told, I’m not an opponent of Fianna Fáil. My grandfather’s brother was an Officer in the Irish Defence Forces and among the proudest moments of his life was being part of the Army bagpipers who played regularly for the Taoiseach – Eamon DeValera. Growing up in Belfast, Sean Lemass and Charlie Haughey (during the Arms Crisis) were my heroes. One relative recalls playing Irish music for a group of pro-Gaddafi Libyans in Dublin, back in the days when Haughey was Taoiseach and Semtex was more common on Irish shores than the fish inhabiting them.

There was always a strong Republican wing within Fianna Fáil, particularly with figures like Neil Blaney, Dr. John O’Connell and Kevin Boland. During the Hunger-Strikes, Sile DeValera and other Fianna Fáil figures were among their strongest supporters in the anti-H Block campaign. Indeed, Gerry Kelly and other republicans told of how they regularly stayed in the homes of many prominent Fianna Fáil and even Fine Gael TD’s – that is revealing, it shows that despite mass censorship and Free State militarism, even those in the Establishment recognised they owed a duty to aid fellow Irish people who were leading the fight against Orange terrorism in the Northern counties of the island.

I don’t advocate Sinn Fein going into government with Fianna Fáil as a minority partner, only to be absorbed by the bigger force therein. But an administration which shares the office of Taoiseach and which comes under the scrutiny of a Sinn Fein Finance Minister, could potentially be quite an attractive arrangement in the hearts and minds of the people on this island. As well as a force for peace and reconciliation in the world. A Government with the will and determination behind it to win a referendum on Irish reunification in the South, and to press the Americans and British Government to facilitate the process in the North. But beyond just that, some key tenets of it therein could be;

Now I don’t know Mr. Martin, but I do know that he is a Teacher and a father. And the question he needs to ask himself is simple – Are you, as leader of a Republican Party, with those who act as an obstacle to the Republic? Or, do you want your children to open the history books and read that their father was a bridge to the Republic as opposed to its antithesis?

Yes many have toyed with the idea that a Sinn Fein/Labour coalition would be the ideal force for change, but numerically it doesn’t add up – Labour are dying. So let’s get real. Coalition with Fine Gael shouldn’t even be an option – it destroyed Sean McBride and his Clan na Poblachta Party in the 40’s.

I watched a documentary on Fianna Fáil and in it the author and former partner of Bertie Ahern, Cecilia Larkin, confirmed what I have long suspected of the rank and file of that party – that they deem Sinn Fein a much more attractive partner in government than Fine Gael. Why? Because there is a strong emotional and sentimental appeal among Irish people for a government which reflects the ethos and values of 1916.

So when Mr. Martin goes to bed at night he has one central question to ruminate over – surely the Republic that was proclaimed in 1916 isn’t too much to ask for? Surely that demand is a noble price for government? The other thing he really must consider is the fact that if he doesn’t facilitate the course of history by giving the Irish people the government they deserve, then his party and the electorate will confine him and his leadership to history.

Reunification is inevitable but it doesn’t have to be prolonged. In the past, it eluded us then and it escapes us now. So Mr. Martin, wake up to the sobering reality that it is either to be a context of two states on one island; or the course of history at a close. Business as usual, or, a nation once again?

7 Responses to ‘A Sinn Fein/Fianna Fail Coalition: A Nation Once Again?’ by Donal Lavery