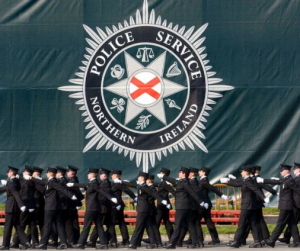 How’s your local bobby, then? Flashes you a small salute and a smile when he stops you, does he? Calls you ‘Sir’ or ‘Madam’, sends you on your way with a cheerful “Many thanks, sir”? Right. Me neither.

When the PSNI first appeared on the streets in their funny new uniform, the change of tone was unmissable. They were courteous, they smiled – you got the feeling they were on the same side as you. Which it’s fair to expect they should be, given that when they talk to you or me, they’re talking to their employer.

More recently, I’ve found the tone has become somewhat more abrupt.I had a police officer a few months ago reprimand me for having my fog lights (accidentally) on. “Count yourself lucky – if you’d been stopped by my colleague up ahead you could be looking at a £60 fine”. Not the way most people talk to their boss.

A report at the beginning of this month suggests the training of today’s PSNI recruits has a distinct military-style twist to it. Recruits are fearful of failing. So fearful that fifty-four of them cheated in their exam and have been forced to repeat their twenty-two weeks of training. All recruits  have to march from class to class, they’re forced to do push-ups in uniform and to sprint wearing business clothes.

No doubt all of that will change or has changed, given the critical report. But it suggests that our new Police Service (you do know they’re our servants, don’t you?) has a tendency to harden into the more abrupt and aggressive people skills that we’d all like to see left behind with the RUC Police Force.

I’ll shortly be putting up a link to an interview I did last week with Mark Thompson of  the Relatives for Justice group. He ranges widely in the twenty-minute interview, but what he has to say about the PSNI is  revealing. And for at least one trusting soul (moi), a little disillusioning.

View all posts by Jude Collins →
ABOUT SCHMIDT by   Perkin Warbeck
FINE GAEL, CASTRO AND THE HIGH MORAL GROUND by Donal Kennedy