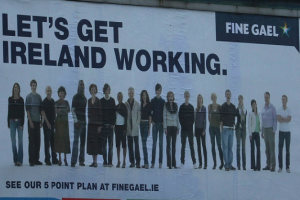 President MIchael D Higgins’s praise of Fidel Castro has, quite naturally, disturbed Fine Gael’s spokesmen. Fine Gael led Irishmen to Spain to support the murderous mutineer General Francisco Franco. Fine Gael condemned the Fianna Fail Government for not supporting Fascist Italy’s murderous, racist aggression in Abyssinia. A typically ignorant Fine Gael spokesman justified the “Christian” aggression of Mussolini in the belief that the Abyssinians were “pagans.” The Abyssinians were and are Christian, and nowhere in the New Testament are Christians urged to murder their non-Christian neighbours. So the Fine Gaeler was ignorant on two counts.

Fidel Castro is accused of executing “hundreds, if not thousands” of prisoners. There is no attempt to ascertain how many, nor the time-frame, nor the context. He is also accused of driving thousands into exile. Again, no context.

Fine Gael’s origins are in an irregular regime – not appointed by Dail Eireann, which swept Dail Eireann and regularly constituted Republican Courts aside, waged war on its former comrades, executed many of them officially and unofficially, tortured many of them, held over ten thousand as prisoners  without trial, and drove many thousands of them as political refugees abroad.

Not once in 94 years have Cumann na nGaedheal or Fine Gael won a majority of Parliamentary Sheets nor the Presidency of Ireland. By its contempt for the Constitution it has induced one  distinguished President to resign. The last Presidential Election saw its candidate lose his deposit.

Foreign Minister Charlie Flanagan says that President Higgins has a different political heritage to his own, Charlie is the son of the late Oliver Flanagan TD whose profile on Wikipedia confirms Charlie’s observation.

View all posts by Jude Collins →
‘Evening, all’
Mark Thompson talks about Relatives for Justice and the PSNI

4 Responses to FINE GAEL, CASTRO AND THE HIGH MORAL GROUND by Donal Kennedy