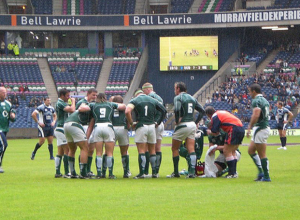 Rugby is really on the up in the here and now and on both sides of the Black Sow’s Dyke, what with the brobdingagian Bid from Biddyland for the Rugby World Cup, 2023 and all.

The Rugby World Cup, is right.

There are 206 listed countries in the United Nations. The same number of countries play rugby, give or take 200.

So, the Rugby World Cup is right, alright.

Not the least animating element of the bid is the return, after a lengthy absence from the live mike of mass communications, of Dick Spring. Seems like the Radisson Radical has been a busy Bolshie (alleged) since his departure from the Doll House, devoting himself onerously to the pinstriped directorship of this, that and the other minor corner-shop companies: Eircom, Flaxco, AIB, that sorta thingy.

It is a measure, oops, bench mark, of the seriousness, indeed the solemnity of Team Oireland’s bid that the revered name of Dick Spring has been appointed a bidder. Everything the moustachioed Nose of Tralee sniffs seems to blossom into an iffy rose-scented flower in his button-hole.

Indeed ever since the departure of Dick Spring, the Labour Party has proved to be erm, Electile Dysfunctional.

But still, rugby is in a right good, robust sort of place here in the two countries of the island of Ireland.

Take for example the decimation of the middle-managerial cohort on Planet Perfect, Planet Oval-ball Oirland. The evidence is there, and it is not good, not good at all.

Look north, like west, look east and – oh, yes – look south and who does one find in situ: in the mid Bainisteoirial bib?

Voila: the Island of Aints and Scholar. (While all aint Irish, one is definitely one whose designation rhymes with dollar).

Now, if one were to go by and ( by the wall of) The Unionist Times while each of them Walks on the waters of West Britannia it is the Big Kahuna himself who verily High Kicks it on the old H2O.

-Schmidt aka The Indomitable Joeman.

How to explain the decimation of the nativist names among the upper echelons of the Alickadoes of Roisin Dubh ? Is The Unionist Times, the organ of Rex Accord of any assistance ? Worryingly, not. Normally so voluble on matters of such minor importance, on this occasion TUT, for whatever unfathomable reason, has opted to keep schtum. Worryingly, very.

One is compelled to look elsewhere, to cast light on this mysterious matter, the wipe out of the Manager-wallahs. The Dark Continent in general comes to mind, Rwanda in particular. Hardly has there been a more drastic decimation of the managerial class – at least to the IRFU – since the Hutus wiped out the managerial class of the, erm, TUTsis.

Maybe, just maybe, this might explain the odd silence on the part of TUT ?

The Perkin’s inner Boardroom watcher pinpoints thus, the nadir of the demise which has so afflicted the Dort-accented Directorial Class: the (sob) removal of the final iconic stick of auctioned furniture, having been flogged at a knock down price (translation: peanuts, as distinct from beanz) from Castlemartin House last month.

Yes, the very chair with the carved scallop shell motif which emphasized the curvilinear element.

Yes, the very identical chair which (sniffle ) accommodated for so long and so faithfully the fundament of the founder of the Irish Fund, the toney toin of Tones.

-Oh, from the hamlet of Kilcullen, County Kildare, what a falling off was there !

One is reminded of a movie, world premiered in 2002, called (gasp) ‘About Schmidt’. Three things remain with one, two wunnerful, one not so, from that time:

-The performance of Jack Nicholson.

-Katie Bates cavorting in, out and around a Jacuzzi in the all-together, full frontal.

At this distance in time one cannot quite recall which were the two wunnerful elements, and which was the not so wunnerful.

Right now, there is nothing that is not wunnerful about Schmidt, the whole oval-ball of wax of whom is wunnerful.

Or is it? The Perkin’s inner Hakka Panic Attacker begs to, erm, demur. Consider the following:

Since last Saturday’s demolition in the Aviva, baleful has been the wailing, backlashful has been the gnashing of teeth, and so hormonal has been the ochoning that it has proved to be (gulp) follicle stimulating in the ague-ridden organs of record in Anglo-Ireland.

-Flaimin’ Paddies have replaced the Poms as the Kings of Whinge !

Was one of the milder headlines from the New Zealand press.

Paroxyms of chills, fever and shivering have been observed at regular intervals in the disinterested, distraught Dublin monovocal media: all readily identifiable symptoms of ague.

So what is it that has caused such an epidemic of ague?

To wit, the sponsors of the Kiwi rugby team, whose logo appears in front of their All-Black ganseys.

The reaction of said media would appear to be in marked contrast, rather, to its reaction to another team which is sponsored by the same AIG.

To wit, the All-Blue Dublin Gaelic football team. And in particular to the treatment meted out on a mandatory basis to the delightfully dystopian Diarmuid Connolly of Dublin. Who is quite simply Ireland’s footballer supreme, all brands included, bar none. That is, when he is allowed to play.

Which never seems to coincide with when Mayo are in the opposition corner. Perhaps because Lee Kiwigan, oops, Keegan is given carte all-blanche to do the hakka on the back of the effortlessly elegant D. Connolly from throw in to blow up.

Even after being finally shown the All-Black card during the replay of this year’s All Ireland Final Lee Kiwigan was further punished by being duly awarded the (gulp) Player of the Year trophy.

There was a noticeable absence of an ague outbreak in the monominded media.

As Sir Andrew Aguecheek of Twelfh Knight (the spelling refers to the dimunition of the Oirish team after their three amigos had early on fallen foul of the toothy-fruity Kiwie) remarked, presciently:

-Unless you see canary, put me down.

(In Shakespearian times, the yellow card was referred to as ‘canary’).

But, to return to the question posed above:

Just as there was one element of the eponymous movie which rather failed to scale the heights could the same charge be levelled, indeed, spirit-levelled at the Spiritual Leader of Planet Rugby Oireland.?

Could it be (whisper it) that he failed to exploit the, erm, Trump Card of the Green Ganseys? As Limerick is the religious redoubt of the rugby fraternity, perhaps, for a change, a Five Line scrum might be awarded:

THE WAILING   WALL OF THE PALE

A free-for-all by each All-Black Neanderthal

While we lack a

Scarier by far was the banal Ireland’s Call

View all posts by Jude Collins →
‘Parity of Esteem –how are ye?’ by Joe McVeigh
‘Evening, all’

5 Responses to ABOUT SCHMIDT by   Perkin Warbeck