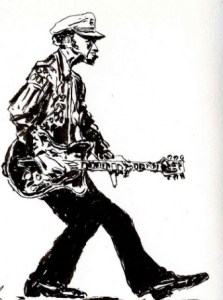 During the recent Presidential Election Campaign in the USA there was much trumpeting about the discrimination doled out to minorities ranging from the Afrro-Americans to the Muslims and the Latinos.

There was also much L. trumpeting about the specficic treatment meted out to another minority, the Native Americans aka the Indians. In fact, much Less trumpeting, much, much less. To the point of any mench being buried at Wounded Knee.

One was reminded of this by a recent news item which, surprisingly, failed to do anything more than nibble the footlines. It concerned the Ancient Ireland East (AIE), the dodge dreamed up by Fáilte Ireland as a counter balance to the Wild Atlantic Way (WAW).

While the WAW is, erm, riding the crest of a wawve the AIE alas, is languishing, becalmed in the doldrums, as it were.

So dolefuly indeed have the doldrums been beaten one almost expects to hear that the drumsticks being used to tap out the low tattoo slowly on the Ancient Irish East are those of an, erm, albatross. Why should this be?

Could there be a clue in the press release thingy which went bumf in the night the dodge was dreamed up by Failte Ireland?

In which every thing gets namechecked from Viking Waterford to Medieval Kilkenny to Norman Wexford to Anglo-Irish Mansions, more or less. More about them, and less about the Leprechaun. It’s not that the nativist is not mentioned but if it is then it’s in lowercase lettering, appropriate to the leprechaun.

While the negative viewer (alas, they are always with us) might view this as a local versh of Bury our Heart at Bended Knee the more positive viewer (among which cohort, The Perkin is modestly proud to number himself) would see it rather as an uncanny profit-based prophecy on the part of Failte Ireland of:

For the press release thingy of theirs which went bumpf in the night (in time for Kornflake Television) contained the following subtext:

-We are the only English-speaking country left in the European Union !

It is unconscionable therefore that Fáilte Ireland be summarily dissed as ‘the soothsayers of untruthiness’, going forward..

All of which has a certain historical continuity about it: for Medieval Kilkenny was the site of the Statutes which were enacted there in 1366 with one grim yet brotherly intention. To wit, that of reasserting English culture among those English settlers who were backsliding and slowly ebbing into the language of the leibeanna of leprechaun (lower case).

All of which sounds suspiciously like a (slightly) less PC version of the Fáilte Eireann dodge.

A modest proposal or two from the Perkin’s ever inner accentuater of the positive, aka, the Perkin Jerkin: a Macnas-style pageant of street theatre to be called The Moving Statutes in which Time Travellers on Stilts would jerkily tilt through the cobblestoned centuries.

Statutes, not Statues. The Three T’s as distinct from The Two T’s.

Another modest proposaL: on the Big House end of things. One in particular comes to mind, and it to be located in Ancient Ireland East and all, or at least, part of it, the Portico part :

In 1966 ( on the 600th anniversary of the Statues of K.) a fillum called ‘Ten Little Indians’ was shot in Kenure House, Rush, Fingal, North County Dublin. It was based on the novel by Agatha Christie which was originally titled ‘Ten Little N-words’ when it was first published in 1939.

Its American edition, however , did a Chuck Berry (see below) and it was retitled’ Ten Little Indians’. It became the best ever seller for a crime mystery novel, having shipped over 100 million copies in the meantime.

Agatha Christie was to the unfurling of murder mysteries what – lemme see – say, Christy Ring was to hurling.

The cast list of the fillum ranged from venerable old warhorses of the acting stable, such as Stanley Holloway and Wilfred Hyde-White to such untested foals as, erm, Fabian. Who, he? He was one of those bubble-gum rock ‘n rollers whom the fundamentalist Jerry Lee Lewis dissed as:

-Bobby This and Bobby That.

Philadelphia-born Fabian’s full name was Fabiano Forte whose, erm, forte was probably not the motely. And although he was, clean Shavian, oops, shaven at the time, he is not to be found by googling the, erm, website of the Fabian Society.

While 95 per cent of the fillum was shot inside Kenure House the other 5 percent was fillumed outdoors in the snowduvet  Mountains of Tyrol. This latter location is not to be confused with Tyrell’s Pass, County Westmeath, which is both flat and a no-go area for snow, mainly.

Rush was no stranger to royal flush actors.

F.J. McCormick was a local, and still spoken of in whispered terms as Ireland’s greatest stage actor in the last century. Orson Welles opined F.J. had it in him to be the best screen actor there could have been, if he was so minded.

He played the minor role of Shell memorably in the Carol Reed-directed fillum, ‘Odd Man Odd’, shot in the black and white streets of the Big Orange, aka Belfast, in 1947. Check out this cameo role of FJ in this fillum and judge for yourself.

Only the fabulous Portico of Kenure House remains, having been duly demolished in the enlightened Eireland in 1978. In its 18th C heyday it was a stupendously vast pile but proportionated in a masterly way, quadrangular in shape and terminated by a hewn parapet, ornamented with urns, that sorta thingy.

Yo, bro ! The lowercase leprachaun has two words for the one and only yew.

Both Kenure and Rush are located in Fingal which in leprechaun is Fine Gall / Foreign Tribe.

But, the second suggestion: perhaps from under The Perkin Jerkin : Fáilte Ireland might appoint a dress alike Hercule Poirot as a tour guide of the Portico of Kenure House and also, the linguistic portico of Ros Eo. He could keep the tourists (if any) amused by twirling his wax moustache even as he waxes eloquent about the Portico and bemused, by taxing his little grey cells even as he wanes hesitant about the other portico (lowercase).

To conclude where one inaugurated: JFK invited the poet (and under-rated epigrammatist) Robert Frost (87) to join him on the podium in front of the Capitol in 1961, to read one of his poems at his Inauguration.

The Donald could do worse, far worse, than invite another poet, one Charels Edward Anderson Berry (90) to do ditto at his Inauguration. It is imperative that The Donald invite The Chuck to his Do, for a number of reasons.

For starters, time may not be on his side. Just as The Chuck was borned two months after El Fidel so does The Donald have but two months to go to The Day of his Big Do.

Both Bob Frost and Chuck Berry were/ are obsessed with travel, life, after all, being a journey. As may be deduced from their more famous lines:

-The woods are lovely, dark and deep

But I have promises to keep

And miles to go before I sleep.

Ridin’ along in my automobile

My baby beside me at the wheel

I stole a kiss at the turn of a mile

A revealing insight, for a number of reasons, into the unique character of Charles Edward Anderson Berry was afforded by a curious incident which happened while he was driving his combo to a gig in New Yawk in the early days, back in the day. Curiously, it spookily involved the combination of New York and an Old President.

While motorvatin’ through the Lincoln Tunnel, the young dude in a hurry in his Oldsmoble blithely overtook in the underpass, a dodge violating in the process the strict Traffic Laws, bigly. Even in an Oldsmobile.

On exiting the tunnel Chuck B was greeted by a welcoming party of about five or six po-lice cars.

Nonetheless, the cops didn’t arrest him or nuffin; just told him to sort out that ole California plate and continue on his way, hoping he had a nice day in the Big Apple. Such is the power of personality, the kick-ass variety.

There would be many birds killed by the one Rocker in this instance – from Afro- to Native American,

-She could not leave her number, but I know who placed the call

Coz my uncle took the message and he wrote it on…… The Wall.

The Chuck could accompany his verse reading by a demonstration of his trademark, erm, Duck Walk.

Could there be a more appropriate guest at the Inauguration of The Donald ?

View all posts by Jude Collins →
‘A JUST RISING (18 JANUARY 2016) – ANSWERING SÉAMUS MURPHY, S.J.’ by Donal Kennedy
The Brexit stink: we’re all in this together. Right?

2 Responses to THE TRANSATLANTIC DISCRIMINATION SWIM       by Perkin Warbeck.