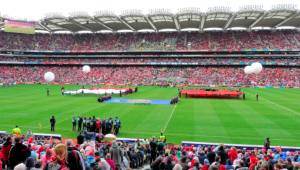 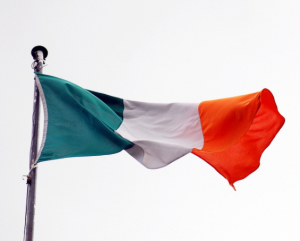 I was on TalkBack yesterday (yes, again, Virginia – they know quality when they hear it – now shut up), talking about the President of the GAA’s suggestion that the singing of Amhrán na bhFiann and the flying of the Irish tricolour might be scrapped in the context of an agreed Ireland. As it turned out, the “context of an agreed Ireland” bit got shoved to the side, despite the efforts of myself and fellow-contributor Patricia McBride. But there were some interesting comments on the flag/anthem part.

I know from experience that most GAA fans are opposed to scrapping the flag and anthem. They cite, with some justification, the fact that nationalists/republicans have few opportunities to express their nationalism/republicanism, and that we shouldn’t be shy about doing so at GAA games.

There’s something to be said for that, especially at games here in the North. Surrounded as we are by British symbols, artefacts and flags, it’s hardly surprising nationalists/republicans are keen to hug the flag/anthem to their chests and say “No, nae, never”.

Personally, while I enjoy the flag and the anthem at games, I don’t feel I need them. Gaelic games are in themselves a major component of our cultural identity: we don’t play the anthem/fly the flag before a Fleadh Cheoil, or an Irish dancing championship, or a weekend of Irish-speaking, or a session of Irish traditional music. The dancing, the language, the music are all cultural elements that can and do stand on their own, without the need for flag/anthem support.

I also have some concerns that there are people who feel, having faced the flag and sung the anthem, they are somehow more patriotic than before they engaged in this ritual. Personally, I think patriotism involves something more.

My suggestion on TalkBack was the suspension of the flag/anthem for, say, five years, and let us see if that opens up GAA games for unionists, who at present very largely shun GAA games. I added that the Norther Ireland soccer team, when playing at Windsor Park, could reciprocate the GAA’s generous gesture by suspending the flying of the union flag and the singing of God Save The Queen.

Reaction was swift. Thomas of North Belfast, that constant unionist contributor to TalkBack, was on the phone in a flash to explain that he’d be for the GAA continuing to fly the flag and sing the anthem, and anyway Windsor Park played God Save The Queen   at international games, which was totally different.

There was a time when I believed unionism was fearful but genuinely interested in moving forward, engaging in compromise, participating in mutual acts of reconciliation. Having heard Thomas yesterday, and having twice messaged Trevor Ringland with an invitation to write on the Ireland one-team rugby and two-teams soccer situation, without so much as a reply from him, I’m beginning to believe what many nationalists/republicans have always said: it’s no, nae, never, not an inch, no surrender, what we have we hold. Unionism would appear to be frozen in the past, and there appears to be nothing that nationalists/republicans can do to defrost them.

97 Responses to Yesterday on TalkBack: the flag and the anthem