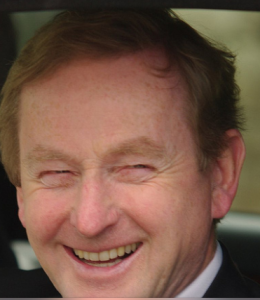 Some of the establishment news media in the Free State have been reporting whispers of a potential government between two unlikely bedfellows, the Shinners and the Blue-Shirts. Indeed, the Fine Gael chief whip, Regina Doherty, has voiced her support for such a move recently. Let’s explore the possibility of that in some candid detail, as well as its numerous implications following historical parallels.

The Irish civil war was a depressing conflict which left a deep scar on the national psyche. Irishmen baring arms against Irishmen over Britain’s dirty deeds, all to the delight of the Orange Aristocracy and Westminster Government. An Anglo-Irish Treaty which partitioned Ireland also partitioned the minds of comrades who had fought side by side just months before. But let us also remember the class nature of that conflict – the pro-Treaty side was dominated by middle class and bourgeois professionals who knew a Free State could still serve their socio-economic interests. By contrast, the anti-Treaty republicans were the men of little property, who had everything to lose materially following the partition of the labour movement in Ireland. Some were socialists and others were patriots. So in a Marxist analysis, the civil war was really a case of a capitalist class destroying any potential opposition or threats to their newly formed bourgeois gangster-state.

Over time, the historical and ideological differences distinguishing Fianna Fáil from Fine Gael have been diluted. Charles Haughey, whatever you think of him, stood for things, including the demise of Northern Ireland. A right-wing element of Fianna Fáil, sympathetic to the anti-Haughey Progressive Democrats’ ideology, hijacked that party and took it on a road opposite to that favoured by their republican grass-roots supporters. As Neil Blaney once said, “I didn’t leave Fianna Fáil but official Fianna Fáil certainly left me.” I would hope that over time the republican elements within that party seize the leadership and refocus their approach to the national question in Ireland.

Fine Gael on the other hand is a bit different. Strongly pro-Brit and strongly in favour of EU fiscal austerity, they are an arm of the British Tory Party on this island. They care little for reviving the Irish language and even less about ending partition – the two founding aims of Fianna Fáil. It is very hard to see how a coherent coalition between them and Sinn Fein could emerge with an agreed programme for government, never mind lasting the full Dail term. But stranger ironies have happened throughout history.

These times are not without precedent. In the 40’s and 50’s, a left wing populist Republican Party, Clan na Poblachta, emerged under the leadership of the late and great Sean McBride. Everyone thought they would replace Fianna Fáil in a series of elections but they only managed a small number of seats by comparison. Convinced they could exert leverage over a larger party in government by threatening to bring the government down if they didn’t get their way, they agreed a multi-party coalition with Fine Gael under John Costello – a former Blue-Shirt leader and barrister.

That government had some positive objectives, like healthcare for mothers/children, ending emigration and redistribution of certain resources, but collapsed under the weight of bourgeois intransigence and church opposition. McBride and the republicans were swept from power, their support absorbed by the bigger parties, and the rest is history. The point I would emphasise is clear, no party has ever entered coalition as the junior partner in the Irish Free State and ended up the better off after their total stint in office.

Even from the example of the last Irish government, it is clear that Fine Gael Ministers insidiously encouraged their counterparts in the EU Commission and Troika to threaten their own Labour partners in government with chaos if they didn’t implement the larger party’s agenda for economic austerity. They used the threats of the EU bureaucracy to undermine the agenda of their own government.

People on this island need a real republican government, which will stand up for their interests. As I see it, the only likely coalitions for Sinn Fein ought to be a minority government propped up by the left-wing independents or a Fianna Fáil-Sinn Fein power sharing administration with a rotating Taoiseach. If Eamon O Cuiv were leading that party, there would be clear scope for agreement.

I think Enda Kenny personally is a decent man, but like many republicans I have no affinity or trust for his party. The republican struggle throughout Ireland has suffered too much pain and sacrifice over the years to see support melt away following coalition with one of the most anti-republican political organisations on this island. I’m glad, as I’m sure many others are, that Gerry Adams just recently verified that government with Fine Gael isn’t even on the table, never mind the horizon. The journey towards power can be a long one, but let us endeavour to be patient so that when that moment finally arrives, you like many Irish people will recognise an affinity in your hearts that we will enjoy government by the people, of the people and for the people, over a game of cat and mouse.