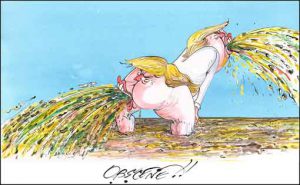 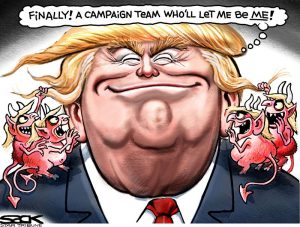 What fun it is going to be in these coming years ……
As the new Fascist Dictator of the World In Chains sat down like some bloated cartoon pig ,straight out of Looney Tunes ,as voiced by Mel Blanc, his tiny deep set eyes and tight arse-hole of a moue, peeking rat-like from amid the brilliance of his orange- tinted skin and light blue eye-makeup.The David Bowie “Serious Moonlight Tour “pancake of flat, blonde contrived hair , mousse, gel , hair-wax , styling mud and hairspray ,balanced , an implacable helmet-like crustacean,teetering precariously above his beetled – brow. He scribbled his “X” on the latest edict before him on the Big Desk and tossed the pen over his shoulder with exaggerated insouciance, for a simpering, fumbling underling to clumsily catch.He had always wanted to do that all his life, like some teenaged girl dreaming of having a baby while forgetting that it all gets a bit more complicated later on.
Donald Trump was home! The newly annointed Fat Controller of the World was at that Big Desk thinking about a Big Mac for lunch….with extra cheese….the dear knows he loves cheese. He must be the cheesiest President in all creation and proudy of that cheesy fact…. but let’s get the show on the road first and sign a few of these bits of paper!.Sort out those damned Mexicans and Muslims and get that wall built…I want it like the Great Wall of China, he dreamed. We’ll have to get some photos from space to put on the White House website when it’s finished.That’ll replace all that rubbish about climate -change and civil rights. …all those lies and old hat.We’ll make America great again like it was in the 1950’s .Bring back segregation and separate drinking fountains and eating facilities.”Whites Only” drinking fountains !That’ll keep the WASPS, the Klan, the hicks and the Scots/Irish trailer-trash hillbillies onside. I must remember to write that down . That should impress everyone! I’d better have a good old row with the Mexican President too and tell him that he’s paying for it all….including my lunch!! Man …this really is a great job ! I get to do everything i ever dreamed of doing.
Let’s think about visiting Britain later in the year and having tea with Her Maj the Queen . The wife wants to meet Prince Andrew and that good-looking wife of his ,but that bloody Prince Charles thinks it should be him doing the meeting .So what, if he is next in- line for the throne .That wife of his doesn’t cut the mustard at all.She’s a bit too homely for my tastes. That Camilla …she’s not like his last wife Diana….That’s the one I tried to get into bed ! Now she was a bit of a looker , alright. I loved those big , simpering eyes…That makes a man feel like a man!I think i could have got in there alright. It cost me me a fortune sending flowers to that one , bu tI think i could have been In- Like- Flynn there.
Anyway, how would any of that look in the photographs? You have to think of the image for posterity . Charles and those ears…. and let’s face it, Camilla isn’t exactly a beauty queen. I want to get in-tight with the prettier one …what’s her name..Catherine ..remember that one whose sister’s arse almost crashed the internet at her wedding…..wearing that tight dress?…that one.Anyway that bloody Charles will only start a row about all that climate- change bollocks that he has a bee -in- his -bonnet about and spoil everything. I want Ivana (Ooops ! …I meant that other one ….what’s her name? ..Melanoma…. to see all the spectacle …the golden coaches , the glittering chandeliers and the shiny clappy people all bowing and scraping as the Donald tours Buckingham Palace with all that royalty.What’s not to like? She’s always loved that kind of thing and if it keeps her busy…….she loves dressing up.
Right …I think I’ll ban immigration now .Three or four months to get it going , maybe and then I’ll extend it after that .Then we’ll start building a big wall all around America .That’ll keep them busy working for a few years ….After that ….well…..What about building a spaceship ? I ‘ve always wanted one of those and an underwater city inside a glass-bubble ? I ‘ll get one of these idiots to draw up a law .I want it all done quickly too…..