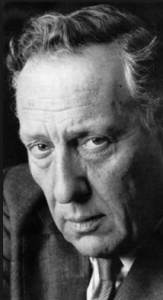 Fifty years or so ago, W.A.W.A. was a mantra often heard on the lips of exasperated Ex-Pats in Nigeria, including Pats who were Ex-Pats at the time there.

Like when one has just settled down of an evening to read a copy of ‘Mister Johnson’, by Joyce Cary, a Londonderry/ Doire Chomchille Ex-Pat writer (male) whose novel was set in Nigeria a generation before. When suddenly, sans warning, the generator suffers a sudden hamstring and the world is plunged into darkness in that particular corner of the Dark Continent.

Like when one  has spent a sweaty hour in the local market searching for an abandoned primate in need of a home. Then, after finding what one is looking for –a lively, trick-loving monkey – one duly puts him and his wooden stand to which he is attached into the boot of one’s mini-minor wagon with the wooden paneling and which nest made it to West Britannia but did to West Africa.

The jumpy monkey is attached to the wooden stand by a rope but the market seller has promised to deliver a chain in a day or two. The first thing one does on reaching home is to feed the monkey some nuts and then with the water left over, baptize him with a new moniker:

In the morning, one wakes up to find the wooden stand still there on the verandah, but Darwin gone, the rope having been effortlessly gnawed through, during the dark hours.

Like when one has just tipped one’s Forty Something ‘house-boy’, called Tadhg (not his real name, but so named in tribute to a history lecturer one was once fact-stacked by and who had a growly voice) with a substantial donation of forty something shillings and thus made one feel better about one’s self. The occasion being, the imminent birth of Tadhg’s latest offspring. Four months later, as Tadhg sidles silently, ghost-like into one’s presence for a similar donation on the eve of a similar happy event……? Turns out Tadhg is really Muhammad and it is his second wife who is expecting on this occasion.

(Pats who are ex-Pats are every bit as proficient as bearing the White Man’s Burden as Bill or George or even a Wild Colonial Boy named Sue ).

One mentions this because a similar mantra of equally dubious provenance has raised its wavy as distinct from its curly head of late:

Meaning, in the rivalry that dares not speak its name in the Irish Tourist Board head office with, erm, Ireland’s Ancient East.

Ireland’s Ancient East. Does not run trippingly off the tongue, then, does it? Not does it exactly crash like a moutinous wave in all its splashy glory against the ear, by contrast with its occidental counterpart, the Wild Atlantic Way. In fact, its troubles do not end there.

Seems like tourists are driving through Ireland’s Ancient East  in droves even as they head west to the Groves of Blarney, the Graves of King McCool and the Grooves of Grianán Aileach.

A re-branding is what is required. Indubitably. A change of name. Scrap the old, open the cat-flap and let in the new: roll of drums, blow of bugle, long strike of gong.

The Perkin’s ever obliging inner tin-ear alley cat has even come up with a signature tune:

-Oh tell me a tale of the Eirient (gulp) gay

Tell me of riches that come from the UK

Ah, but tis grand to be wakened at day

And find oneself nearer to Kingstown Bay.

Not merely content with that bucklep of a lyric but The Perkin is desperately keen to go the exta hard yards and come up with a dodge. Not just any dodge but with one which is desinged to fill an issue which has been, frankly, dodged by The Irish Tourist Board (say s’long to Bord Fáilte).

The non-issue of any information to do with (gulp) Haunted House where the the Unholy Ghosts of the Eirient do Bind their Spells.

To set the ball rolling, one has one particular house in mind, that one visited by The Perkin on one noteworthy occasion.

It was in 1978 as one walked up the long curving driveway which led to the splendid rural pile on the northern edge of Enniskerry on the Glencree road in which a famous English thriller writer was in tax-deductible residence at the time. Though one had first become aware of the novelist through a non-fiction book of his – his debut publication.

One can locate the date without a bother: September 29th, 1978. By googling the date of the sudden death of a famous man, the night before. As it happened, the night before had been a meteorological sequel of sorts of the ultimate Irish meteorological blockbuster which was premiered on 6th January, 1839, and which has gone down on the calendar, as:

Or, as the (yawn, stretch, trouser yawn) marketing Marjories of The Ancient Irish East would put it:

-OMG, this OGM really means: The Night of the Big Wind.

So, one was too surprised to see a large elm had been blown across the avenue overnight. Just as one reached the horizontal semi-deciduous a Mini Minor (non-wagon) had pulled up at the other side, having tooled from the Big House.

The host/ driver hopped out, and greeted one:

-Hi, there. You the Warbeck chap I’m expecting ?

-That would be correct.

-Here, do lend me a hand to clear this conundrum out of the way.

Once done, he said in an unusually animated voice:

-Here, hop in, old boy, I’m driving down to the village to get the newspaper. A big news story broke last night.

Thus, The Perkin’s introduction to Freddie Forsyth (for it was he !) was not at all unlike a scene from one of the fellow’s spy thrillers. And as one waited in the mini car of the major bestselling author one glanced around at the alpine ambience of Enniskerry. If one spotted John Boorman, the fillum director who also lived in County Wicklow, crossing the Diamond, as one had done on a previous occasion, one felt the plot would be complete.

Boorman to direct a script for a fillum by Forsythe dealing with the abrupt cessation of John Paul 1:

-Death of the Thirty Day Pope.

One didn’t, as it happened, though this did not distract one whit from the immutable beauty of the capital of Deliverance country, Leinster style.

The back wall of Freddie Forsyth’s study was dominated by the framed photograph of General Chukwuemeka Odumegwu Ojukwu. He was the leader of the breakaway Republic of Biafra from 1967-1970 which led to a blood-drenched struggle with Nigeria, whose British-created ‘territorial integrity’ had been impugned, bigly.

(As one recalls, Forsyth oversaw the education of Ojukwu’s children in Ireland).

Forsyth reported on his early activities as a journalist. His early career was spent covering French affairs and the attempted assassination of Charles de Gaulle. He had never been to what he termed “black Africa” until reporting on the Nigerian Civil War between Biafra and Nigeria as a BBC correspondent. [7] He was there for the first six months of 1967, but few expected the war to last very long considering the poor weaponry and preparation of the Biafrans when compared to the British-armed Nigerians. After his six months were over, however, Forsyth – eager to carry on reporting – approached the BBC to ask if he could have more time there. He noted their response:

I was told quite bluntly, then, ‘it is not our policy to cover this war.’ This was a period when the Vietnam War was front-page headlines almost every day, regarded broadly as an American cock-up, and this particularly British cock-up in Nigeria was not going to be covered. I smelt news management. I don’t like news management. So I made a private vow to myself: ‘you may, gentlemen, not be covering it, but I’m going to cover it.’ So I quit and flew out there, and stayed there for most of the next two years.

He thus returned to Biafra as a freelance reporter, writing his first book, The Biafra Story, in 1969.[8]

The Perkin informed the former freelance reporter that his book (banned in Nigeria) became a must-read among the Irish ex-pats (overwhelmingly missionary) in that country. The one dog-eared copy in one’s area in Kwara State had been smuggled back from Ireland through the customs.

And when one went on to relate how the students in the Teacher –Training College to which one was attached breached the law his antennae were alerted.

As follows: every month or so during the course of the conflict, General Ojukwu would broadcast a state of the war address on Radio Biafra.This invariably took place at 6 a.m. It was declared illegal for any citizen in Nigeria to listen to it – by the Nigerian Goverment of General Gowan.

En masse, and off their own bat, the student teachers hopped out of their bunks in their dormitories on the dot of 6 am to listen to the address. Was it to hear what political points the rebel leader had to make? Well, not exactly. Rather were the students far more concerned with how he delivered his mesage: General Ojukwu, being a graduate of Oxdord University, spoke a very polished form of the German Queen’s English. The students duly took notes of unusual words and their pronunciations..

(As one recalls, Forsyth oversaw the education of Ojukwu’s children in Ireland).

This anecdote seemed to strike a chord with Freddie F and one sensed one was away on a hack. The visit, which one expected to last for a hour, expanded by a factor of four to include a tasty lunch delivered on a tray by Mrs. Forsyth whose accent betrayed her Belfast origins. Cannot be dognatic at this remove whether there was soda bread farl, boxty, yellow man, champ or dulse (it was too late for an Ulster fry) on the bill of fare, but it was a distinctively tasty Nornevrland dish.

So, by a commodious vicus of recirculaiton, one returns to the original point of this obliging article: how to boost the fortunes of Eirient (nee Ireland’s Ancient East).

In August 2015 Forsyth revealed that in Biafra he began work as a spy for MI6, a relationship that continued for 20 years. He claimed he wasn’t paid.

Welcome to the Haunted House Halfway up the Hill !

Or, as they used to say in Nigeria:

View all posts by Jude Collins →
Twenty-nine years ago: The Irish Times speaks out
Stormont: time to go?

One Response to W.A.W.A. by Perkin Warbeck