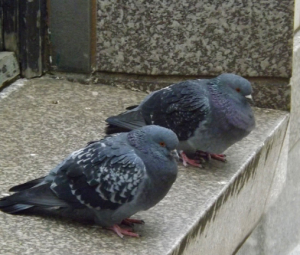 I’ve just heard the news that Martin McGuinness has resigned. That has speeded up the ‘game of chicken’  Arlene apparently thought it was – in fact has shown that it wasn’t a game at all and that it wasn’t so much about blinking as bluster on the part of Arlene and the DUP.

There’s also a video clip doing the rounds in which Martin McGuinness announces his decision. In keeping with the shock announcement is the shock of his appearance – he looks ten years older and in poor health. Whether this has been a factor in his decision to pull the plug I’m not sure. Regardless of his health, the Cash-forAsh fiasco had to end badly.

The DUP will now rush to circle the wagons and point the finger at Sinn Féin as being to blame for bringing down the house on the hill. What in fact has led to the present situation is the DUP’s RHI scheme. It’s been their  monstrous and monstrously expensive baby from start to finish, and all the misogyny/attack on my father/attack on my school bus/Jonathan Bell/ game of chicken/here, you take the baby  in the world won’t change that.

The other point that needs emphasising is that this is NOT a DUP vs Sinn Féin matter. It’s a DUP vs competence/honesty/transparency. It’s also a matter of economics  – aka money. As  Sam McBride said on Talkback today, there are a large number of people out there who would not normally have voted, who are incensed about this whole matter. There’s nothing like someone nicking your wallet and emptying it to rouse you from the deepest of torpors. The DUP will of course run the election as “Vote for us and stop the First Minister’s role being passed to Martin McGuinness!”  There’ll be several  problems with this. The central matter is an economic, not a constitutional one, so only those willing to be duped will be duped.  There’s a chance that they may not be facing Martin McGuinness but a stand-in for him or even his successor. And you can fool people only so many times.

In fact  I’d like to think that the electorate will see through this usual DUP bogey-man baloney. I’m even hopeful they might end up taking a lead from Peter Finch in ‘Network’.  Is that too much to hope for?

View all posts by Jude Collins →
INSIDE THAT BUBBLE
Martin McGuinness’s resignation:five points to keep in mind