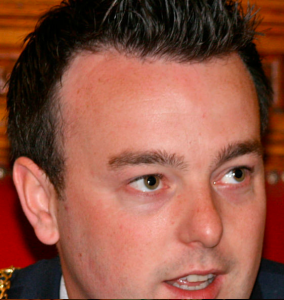 Charlie Haughey once described “Northern Ireland” as a “failed political entity” at his party conference. He was referring to the fact that despite its continued existence, it certainly isn’t going to last nor blossom. I want to recycle the phrase but apply it to a man whose political career is coming to a fruitless end, so soon after politically knifing in the back Dr. McDonnell.

Mr. Eastwood is trying to present himself as the youthful face of a rather greying old collective of right-wing Catholics and pro-Brit stooges. He may be from Derry, but he’s definitely no John Hume. Never, at any party conference, does he or any of his colleagues dedicate any substantial portion of time to the subject of Irish reunification in our county; and nor does he afford any effort to the subject of economic and social equality – the two pillars which his party was apparently founded upon.

Anyone who follows an SDLP conference, with a few stimulants at hand to stay awake, is bound to see not just a dismal lack of members but a total deficit of ideas. The whole thing is a stage managed critique of Sinn Fein, and that’s literally what it is. No exaggeration intended. These people have nothing else to talk about and even less to offer. What you have is a grouping of bitter middle class Catholics and Church-oriented interests, who have a dull agenda of trying to stymie Irish republicanism in the North. They’re old Tsarists in a fresh Bolshevik society.

After this election, Colum and his colleagues are going to be reduced to mere single digits in their seat numbers. But the questions to ask are; Can Colum Eastwood survive? And can the SDLP survive? The answer to the first one is, authoritatively, no! After losing a second election on his watch and with an ever decreasing vote, I predict that one of the young ladies in the SDLP will administer the knockout blow to remove Mr. Eastwood from the sinking ship he is so adamant on captaining. All eyes on Claire Hanna.

What makes me think that? Well, he hasn’t attracted many, if any, new members to his party. The policies are still much the same as they were almost two decades ago (to get into bed with the Ulster Unionists). There are people there who are slightly more able than him. And the same betrayal he inflicted on his former leader may well be emulated against his own best interests in the same Shakespearean fashion. Looking at images of him lately, he neither appears nor sounds like a man with fire in his belly. There is no fight left in the lad and he knows his legacy will be naught.

But onto the second question – Can the SDLP survive? They can continue to linger around on political life support, at least for another election or so. But inevitably they will go the same way the Progressive Democrats and the Labour Party did in the Free State. Why? Because you can’t be a part of the problem (the bourgeois political class) and then ridicule it at the same time, in the hope that people will believe you capable of changing anything. They are the most Europhile party in the North, for rather circumspect reasons to be honest, yet they don’t even have a seat/voice in the parliament they would hand all our sovereignty over to. Likewise, they made no impact on the Brexit vote at Westminster. They make no impact at who forms or will form a government in the Dail. And they will again make no impact on what happens after this Assembly election. The final curtains are falling, Colum.

Before you cast your vote on March 2nd remember this, the SDLP have no red lines with the Unionists. There are no preconditions to a return of power-sharing with them. They aren’t going to guarantee an Irish Language Act, they aren’t going to deliver equality for same sex couples, and they aren’t going to ensure the British state honours its commitments regarding legacy inquests. Their sole ambition is political office for the sake of it. They have no country and they certainly have no soul. So they’ll allow the Devil to take the hindmost for the luxury of “mercs and perks”.