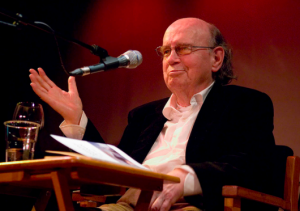 As long threatened, a word of explanation re title of this Guest Blog. Which was sparked by the biography of Myles na Gopaleen by the Leprechaun-loathing Anthony Cronin.

To do so, one must refer to that most, erm, iconic of photos of the Free Southern Stateen (perhaps emblematic is less problematic, as in: The Emblematic Snap of the Emerald Isle).

That would be the snap taken at the Martello Tower in Sandycove of the First Official Bloomsday, June 16, 1954, a demi-century after the Day when Irish Literature’s semi-detached deity, Jemmy Joyce set his most celebrated book. The book destined to become the most praised and least perused novel in the long and chequered hyesteria of that genre: ‘Ulysses’ (pronounced ‘Useless’ in the Dubalin dialect).

A Kodak moment once seen which will always stick to the inner eye: a snap for the ages and for those on minumum wages.

The snap features five men: only three of whom were on minimum wages. The outer two did not count, in this catergory: John Ryan (left) belonged to the family of merchant princes who owned Monument Creameries and an unidentified Dub who may well have been Tom Joyce, a dentist and cousint (Dubalin dilaect word for cousin) of the author of the novel which he had never read.

The central three are (l to r) Anthony Cronin, Myles na Gopaleen and Patrick Kavanagh. The Fifties, being a great decade entirely for snappy literary dressers with a penchant for unhappiness and snap-brim fedoras, sees the two Ulstermen in same in the snap. The hatless Leinsterman, Cronin, has that other de rigeur prop of the Fifties in his right hand: a fag, possibly even of a Sweet Afton or indeed, Craven A provenance.

The title comes from the biographer and the biographee: both were, erm, Modernists with the capital M and both were also Old Boys of Blackrock College.

To elucidate: a Mod in this Anglo ambience was not just short for Modernist but also shorthand for a loather of Leprechaun (which was and still is irredeemably Bostuck to the Back Story of Ballygobackwards) and a Rocker is a backdated alumnus and literary luminary of Blackrock College. That is, in the Geldoffian sense of that term, i.e of the Post-Gaelic Gelded Generation.

Far and away the most focused figure in the photo is, of course, Anthony Cronin: out of one eye, behind those big, black hornrimmed glasses, gleams ambition while out the other, glints calculation. His legendary knees are, of course, are, as ever, focused upon one another and so give an ironic dimension to (gulp) the ancient Leprechaun phrase:

For this snap of The First Bloomsday was also the First Official Photograph of The Dublin Institute of Advanced Buddies.

Featuring as it does the Loan Arranger of Literary Dublin, delighted with his twin catches. Ulysses being a flimsily camouflaged auto-racialist rant against the, erm, Gaelic Thingy, from the Leprechaun to the Bogball. The catches from the rancid ranks of The Citizenry being Patrick Kavanagh (a deserter from the Bogball) and of course, Myles na Gopaleen, the jokey Tonto of the Teanga.

(The joke, of course, on generations of monoglot schoolboys was that ‘tonto’ is the Spanish word for ‘idiot’ or in Ireland, ‘eejit’).

For The Dublin Instittute of Advanced Buddies, read ‘Aos Dána’ the injoke Leprechaun for Soup Kitchen for the Super Stars of Scribbledom and other P-Artists with a penchant for the the two-way Hand Out.

And which Anthony C saw to it was established in 1981. That was after he had pesuaded an unsaddled CJ Jockey to lend him his ruler , the better to whip-crack-away the clearly addled Tee Shock into line.

But the genesis (it rhymes with Ulysses) of Aos Dána goes back further than 1981.

– ‘Later in the week of President Kennedy’s visit to Ireland in June 1963 we all read reports of the garden paty, the attendance list of which included the names of no literary figures whatever. It seemed that those who had been invited, the presumed elit of Irish society, had behaved like pultogues or perhaps gawshogeus. When Kennedy appeared on the steps into the garden they rushed forward excitedy pulling at him and at his clothes so that they would have it to say that they had shaken the great man’s hand; and Kennedy, considerably mauled, was forced to retreat indoors while they were calmed down’.

And to find out what prompted A. Cronin to see himself as a poet qua political manipulator, indeed,   the very model of a modern Edmund Spenser one must press the reverse button back further, much further.

That was the year Edmund Spenser, a Mainlander who, having served with Walter Releigh, at the Smerwick Massacre in West Kerry, stayed on in Ireland to be awarded an official posish and lands in Kilcolman, near Doneraile in North Cork, and published a genocidal tract against Gaelic culture as war propaganda, called:

-A View of the Present State of Ireland.

Spenser wished devoutly that the Irish language should be eradicated, writing that if children learn Irish before English, “Soe that the speach being Irish, the hart must needes be Irishe; for out of the aboundance of the hart, the tonge speaketh”.[22]

He pressed for a scorched earth policy in Ireland, noting that the destruction of crops and animals had been successful in crushing the Second Desmond Rebellion (1579–83)

Small surprise that Steady Eddie’s read left Crony-nourishing Tony all shook up to the marrow of his Throne-haunting bones.

It was to Tone’s credit (eternal) that he read CJ Jockey to a Taoiseach: one who was in thrall to the chaps who call theyselves poets.

How snugly E. Spenser would have fitted into the Smugness of Mod Ireland: his most celebrated poetical work is, erm, The Fairie Queen.

Tone’s secret wish was to play Stallone in

Rocky : weary to be stereotyped as Onan

As already noted in the first insalament of this Guest Blog the Indispensible Fakir of the movers and shakers in the Art-Trouser Coffers featured a major riff in his biography of Myles na Gopaleen. The one in which the Cash Dispenser echoed the pews of his mentor, Edmund Spenser.

There are a few minor riffs to be heard as well:

Ciarán O Nualláin, the eldest brother of Myles na Gopaleen, for example. This riff is on the wide side of snide.

Or was he? The eldest bro, so.

Page 9: Brian was the third child : he was preceded by two brothers Ciarán and Gearoid (Gerald).

Page 13: Ciarán, the eldest, was now ten and the youngest Brian, seven.

But stay, hold your whistle: this is what Fintan ‘Nobody’s Fool’ O Toole had to scratch in his detached eulogy to A. Cronin:

-His biography of Myles na Gopaleen is a very rare example of a portrait that is both intimate and objective, combining personal knowledge with serious research.

So, that’s all right then, trust me.

But, yet and yeti:

Page 26: Reflecting on their first school experiences in his book, Oige an Dearthár (The Youth of the Brethern ) afterwards, Ciarán was to say….

Oige an Dearthár actually translates as The Youth of the Brother. As one understands it, Brethern is what, say, take at random, ah, yes, E. Spenser would have called the plural of brother. But, then, the biographer modestly takes credit for being the ‘tranlsator’ of Ciarán’s memoir in Leprechaun of his (singular) brother.

There is something Yorick-like about the dogged digs by the one-time doric columnist with The Unionist Times at Ciarán who, it turns out had taught his younger brother, English:

(Such as, say, the puke-patterned pubs of Literary Dublin as seen through a golden glass of cadged Paddy Old Irish Whiskey ?)

(Sub-text, no writers of detective stories in Scandinavian need apply).

(See Poor as Church-mice Poets in the German Queen’s English in a country supposedly devoted to the Literary Thingy, above).

The Perkin must declare an interest here: having shared the same space, as the current fetchng and fetch-up phrase has it, with both the biographer and the biographee’s brother, if not, indeed, The Brother. Though not simultaneouly.

During the three years one was acquainted with Ciarán O Nualláin, a candidate for the second shyest person one has ever encountered, one never heard more than three words from him:

This earned him the nickname ‘TnG’ (the emphasis was on G for Gann) which proved to be quite prophetic in its own modest way, considering that TnG (as in Telefís na Gaeilge) was still almost twenty years down the long and winding road.

The paucity of verbals between us is partly explained by Ciarán’s preference for Spanish as his lingua franca at the time: one’s own Spanish was even more ‘tambaleante’ then than now.

As a signpost to Ciarán shyness the following incident  might serve as well as any other: when UCD decided to award him an Honorary Doctorate in 1983 (for his services to written Irish) many of his acquaintances wondered how he might cope with the undue public exposure which the ceremony would entail. Incudling the donning of academic robes, the posing for photographs, that sorta thingy.

They need not have worried. When called on the morning of the ceremony, he failed to answer, having passed quiety away during the night, imithe ar shlí na leath-fhírinne..

Perhaps it is fitting to leave the last word with CON, as he liked to sign himself.

On a now legendary occasion, possibly at a reception at whch he was at attendance (no doubt under protest) he was overheard to be in animated conversation with an acquaintance. Another in attendance fancied he heard his own name being taken in vain and interjected himself into the conversation.

Which caused Ciarán to swivel around and round on him:

Before turning his back on the interloper and continuing his duologue.

One never did discover who that interloper was, but one likes to think it might even have been Edmund Spenser’s successcor, the Cash Dispenser.