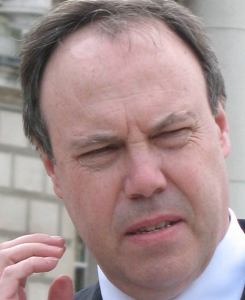 I happened to catch Nick Robinson’s interview with Nigel Dodds on BBC Radio Four’s Today programme this morning.  Nick made a point – at the start and at the end – that the leader of the DUP had been invited to appear and declined, and Nick wasn’t overly impressed by that. However, in my view he was led up a blind alley by Nigel Dodds about the reason for this election.

You’ve probably guessed what Mr Dodds said. That’s right – it was all Sinn Féin’s fault. He also said that Nick was “factually inaccurate” to say that Arlene had resigned.  She had been brought down by Sinn Féin, and the whole mess that things are in now are essentially Sinn Féin’s fault. I’m guessing that Nick didn’t/doesn’t know the true facts of the case, and the incompetence at best and corruption at worst swirling around the whole RHI scheme. I’m also guessing that Sinn Féin will not have a chance on the Today programme to set Nigel’s version in shall we say a fuller context.

Which if I’m right  is a pity, since the BBC prides itself on its balance.

13 Responses to Nigel talks to Nick