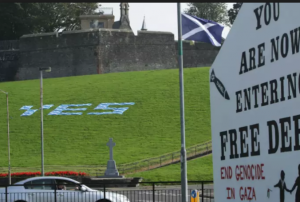 A few weeks ago, when Sinn Féin swept to its best-ever election results in our North-East Nest, the present Mrs C murmured “Next, the fusillade.” As usual, she had read the runes correctly. Stephen Collins ( no relative, I tell you, no relative)  in today’s Irish Times does what Stephen Collins does.

The title of his article – ‘Sinn Féin exploits Brexit worries to keep united Ireland centre stage’  gives you a hint of what is to come. While others worry about Brexit, Sinn Féin cunningly ‘exploit’ the situation.

And it carries on in that vein, “Sinn Féin’s decision to torpedo the Assembly talks belies all the fine words at the McGuinness funeral about the acceptance of compromise.”

Stephen isn’t very happy either with Bill Clinton’s summary of McGuinness’s life: I fought, I made peace, I made politics.“Yet that neat summary glamorised a multitude of sins. For a start it did not spell out what fighting actually meant. The car bombs, the kidnappings, the shooting of ‘informers’ was a savage business.”

But that’s OK, because Stephen rectifies Clinton’s short-comings by citing yet again the case of Patsy Gillespie, who worked part-time in a British army base and was said to have been chained into the driver’s seat of a truckload of eplosives, which were then detonated when he’d driven them into a British army checkpoint, killing him and five British soldiers. He even goes back to 1977 and a fictional work written by my fellow-townsman Benedict Kiely, which describes a similar event.

What is eating Stephen, as you may have guessed, is that Sinn Féin appear to be getting some good publicity.

“The orations at the McGuinness funeral were part of an ongoing project to rewrite the history of the Troubles in a way that justifies the campaign of murder to the present generation and future generations. That narrative is already taking hold and will become pervasive unless it is challenged at every turn.”

I have a suggestion, Stephen. Have a read of a volume called ‘The Good Old IRA’ – that’s right, the IRA which fought the Black and Tan War. There you’ll discover the fact that war is a ghastly thing and was just as ghastly back in the early part of the last century as it was in the latter part of the last century. During the commemoration of Easter 1916, did Stephen have any sense that the ‘narrative’ (God, I hate that word) of those days was being air-brushed a little? That southern journalists and politicians were solemnly honouring the creation of the southern state which was born out of savage violence? And that if the burial of O’Donavan Rossa wasn’t used for ‘propaganda’ purposes at least as much as the funeral of Martin McGuinness, then the history books have got it all wrong.

I’ll provide a link to Stephen’s piece. If you don’t detect a note of desperation running throughout it, maybe you should check with SpecSavers.

I wouldn’t want to credit Stephen with being the only anti-Shinner marksman but he is one of the most transparent. Anyway, as predicted by the present Mrs C, the fusillade has started. Stand by for more.

Here’s a link to Stephen’s wham-bang.