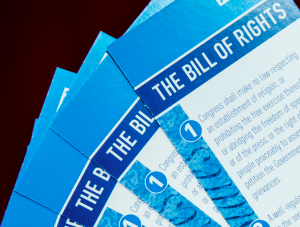 Catherine Kelly is a native of Carrickmore, Co. Tyrone. She is currently a doctoral student at SUNY Albany, focusing on political rhetoric from Ronald Reagan to Donald Trump.  She is a  graduate of Columbia University, New York and Queen’s University, Belfast.

In the recent election in Northern Ireland, one party campaigned on the time –honoured tradition of Fairness, Equality and Dignity for all. Whilst the aftermath of the election has been dominated by conversations of “Nationalist Resurgence,” perhaps it is more helpful in the current adversarial political climate to propose instead that what we have actually witnessed is a demand for a more fair, just and equal society.

Since the passage of the Good Friday Agreement, almost 20 years ago, the political institutions at Stormont have paid mere lip – service to the adoption of a Bill of Rights. Some within those institutions have outright opposed the measure. The standard argument against a Bill of Rights is often grounded in the liberty –equality dichotomy which posits that freedom demands we not legislate and institutionalize equality and instead entrust its development to the good–will of man. Societies across the world have realized the futility of such optimism about human nature and instead have revolutionized their societies with legislation based on the humble belief that all citizens are equal and deserve to be treated as such.

Even a casual observer of the developments in Northern Ireland since 1998 would not deny that segments of the community have been left behind –certainly economically and politically and indeed socially. Progress for one group is measured as a threat to the other group, with no account taken of the fact that progress for one is progress for all. In a society with a past such as ours, we need no reminders of what such a sense of disenfranchisement can bring.

A fair, just and equal society is in the interests of all citizens of Northern Ireland. We cannot entrust this aspiration to the good–will of our politicians and citizens. Therefore, it seems that the next logical step in this post –election period is for political leaders who are serious about equality and fairness to immediately begin a conversation on the matter and to sincerely push for a Bill of Rights that protects the interests and dignity of all citizens regardless of their religious, cultural or sexual orientation. Equality and fairness are not to be feared; rather they are qualities that will enhance all of the communities we live in.

2 Responses to ‘Who Fears to Speak of Fairness and Equality?’ by Catherine Kelly