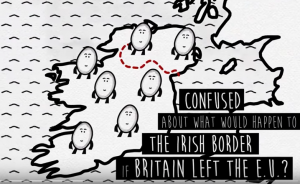 From its beginnings in 1920 the border from Newry to Derry, imposed by the British government, has been a real obstacle to an all-Island economy. During the Troubles when the border was completely sealed by the British army the economy suffered grievously. Only an all-island economy could hope to bring about prosperity and job opportunities for all the people living on this small island.

The first opportunity that Ireland (26 counties) had to break the British stranglehold was when they joined the then EEC in 1973. Even though the British government joined around the same time the new relationship with a wider market gave the Dublin government an opportunity to break free from dependence on the British market. It meant that the 26 counties were now entitled to the benefits of belonging to the Common Market. It has been good for the Republic (26cos).Look at the roads. It has also been good for the north especially the farmers who receive farm supplement payments. The EU played an important role in securing the Peace declared in 1998 in the GFA. They invested money in the peace process in programmes for reconciliation, education and economic development. With Brexit all of that is about to end.

Brexit, when it is implemented, will change everything on these islands –if we do not resist the British and insist on special status. For us in Ireland it has put the focus once again on ‘the border’ between the six and twenty –six counties that has existed since the British partitioned Ireland in 1920. That border has been a great source of annoyance and inconvenience. We all remember during the war how it was a real source of friction with bad-mannered British soldiers and a cause of great inconvenience for people travelling north and south. It was also a great inconvenience for people along the border who had relatives on each side or whose farms straddled the border. In some places parishes straddled the border. There was a house on the border and when the owner went to bed at night his feet were in the south and his head was in the north. This was and remains an artificial border which should never have existed and which should be abolished rather than strengthened.

England voted to leave the EU along with Wales. Norn Ireland voted to Remain as did Scotland. Clearly the UK was never more disunited and directionless. Surely it is time for the people in the north and south of Ireland to think of another way forward by insisting on an All-island economy as the only way to achieving any kind of prosperity for the whole island. Think of the advantages in having one Development Agency for the whole island rather than two competing, or one Tourist Board instead of two. It does not make much sense to have the two parts of such a small island competing for business.

It is estimated that there are 30,000 crossings of the border every day-mostly trade and business. This traffic has increased significantly since the peace process began. Anything that would hinder this like the restoration of checkpoints and barriers would surely undermine and halt the progress that has been made in recent years. It is not surprising that the majority in the north voted to Remain in Europe. It is in their own best interests and in the best interests of furthering the peace process. It is incomprehensible to me that Arlene Foster would opt to leave the EU. She cannot have had the interests of all the people at heart when she advocated a Leave vote.

It is now time to have a conversation about the benefits of an all-Island economy in Ireland for workers. builders, for farmers and for the Agri-food industry. It is time for the economists and progressive politicians to pursue this goal. Surely this would give hope to our young people, many of whom are contemplating going abroad when they finish their education.