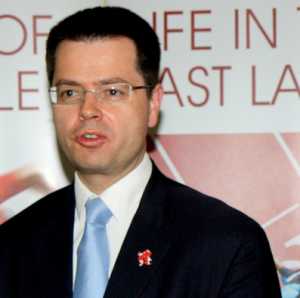 Here’s the British Secretary of State James Brokenshire on 10 March:

“If no agreement is reached in the short window following the election, there would be a number of significant consequences. There would be no Executive, no real budget, no Programme for Government and risks to public services. Ultimately we would also be facing a second election with ongoing disruption and uncertainty for businesses and the people of Northern Ireland that would bring.”

“I don’t think there is any appetite for any further immediate snap election. The public have only recently gone to the polls and delivered what, I think, is a very clear message in seeing and wanting to see devolved government back on its feet again.”

In other words, when little James says “If no agreement is reached in the short window following the election…we would also be facing a second election”, he really mean “I don’t think there is any appetite for any further immediate snap election”.  When James says black you must realise that he is really saying white. Clearly a man on whom we all can depend.

So what’s been happening over the last few days of discussion between the parties?  Well it’s hard to know. The DUP weren’t  in Stormont on Sunday, and on Monday they accused Sinn Féin of walking away from the talks. We also hear talk that the organisation of the talks was a shambles. There was no chairman- and no,  Virginia, little James would not have made a lovely little chairman, since the talks – does this need repeating  – the talks involved or should have involved not just our political parties but also the Irish and British government, the latter in the form of James Beag. The idea of a chairman is someone detached from the fray who can guide things. Which the SoS clearly is not.

So where are we headed? Well, I see today a suggestion that the pay of MLAs will be stopped after three months. I think that’s fair enough, and might provide the spur for people to come to their senses. Although any non-salary spur will be as nothing compared to the spur which the DUP and unionism in general have already received in the election.  The demographic clock can be heard ticking loudly in the corridors of Stormont, especially in the section inhabited by the DUP. They are walking a hugely difficult tight-rope. On the one hand, they can’t afford to look as though Sinn Féin is calling the tune – hence the refusal of Arlene to step aside temporarily while we all find out what the Cash for Ash thing was all about. On the other hand, they must abandon the arrogant tag,  if they’re to seem reasonable and not pour oil on the flames of indignation that carried Sinn Féin to such a stunning election performance.

A final thought: nobody knows what is going to happen. If they did, they would be down at the bookies, placing heavy money on a nag in the 3.30. We can only guess. My guess is that Sinn Féin will be looking for some very significant shift in the position of the DUP, in terms of an Irish Language Act,  commitment to past Agreements and a sea-change in attitude among  DUP politicians. All of these are a big ask: Arlene has said no Irish language act will pass under her watch; and to commit to aspects of the Good Friday Agreement or the St Andrew’s Agreement is to concede that, up to now, you haven’t been abiding by what you’ve signed up to.

The DUP must find a way to indicate that it wants to enter into an Executive partnership with the Shinners, a partnership based on mutual respect and willingness to develop reconciliation. If it fears that to do so would  alienate its electoral base, then it has a poor opinion of the people who elect its MLAs.  And I’m sufficiently optimistic/starry-eyed to believe that the unionist people are better than that.

29 Responses to James Brokenshire: the waste of space tells the parties they have a short space for talks