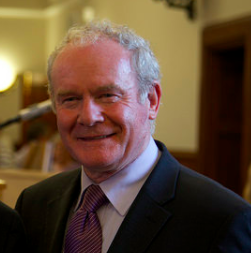 It would be wrong to suggest that Martin McGuinness didn’t divide opinion; anyone with a strong set of ideas and an underlying philosophy behind them will inevitably have detractors. Just like Fidel Castro or even his foe Margaret Thatcher, he didn’t care what people thought of him personally, he knew what he believed and pursued those things vigorously despite vehement opposition from all quarters. That’s what distinguishes between a conviction politician and a canny careerist who simply wants elected. Those who are ideological about their core philosophy don’t need the media or banks or state to necessarily be on their side in order to hold their ground, they know what they think. They say what they mean and they mean what they say. When Mrs. Thatcher died, I was talking to a friend and he asked me my views on her – I said that I hated virtually everything she did but I never doubted for a second that she believed what she was doing, and by God did she set about doing it. The Left has now lost such a rare figure.

I met Martin McGuinness when I was younger and while at university up in his office at Stormont, and not knowing how he would like to be addressed I simply said “how are you sir?” He laughed and remarked “This well-brought up young man knows I have met the Queen but I certainly haven’t accepted a knighthood, Donal!” And from that point on, he was very disarming and friendly. There was a glint of mischief in his eye, which Alistair Campbell once remarked upon; a noticeable lack of fear or the capacity to be intimidated. He was authoritative but distrusting of authority, a radical by mind and by heart. When he first went to Downing Street to meet Mo Mowlam and Tony Blair, he told Blair straight that any proposals would have to be communicated back to the IRA for approval. Blair looked at him and then with a giggle replied, “Well Martin, there’s a mirror in the next room!”

Before McGuinness was even born, there had been routine discrimination against Catholics and also violent conflict between the two traditions in the North. The British Government had armed Protestant militias following the inception of the Orange State; and brutality was a systematic practice of life here. I’m old enough to remember British soldiers still being on the streets, even after the ceasefires, and can recall the deplorable manner in which the RUC treated nationalist citizens. It was a grim atmosphere which spanned almost a century, predating any revisionist sentiments that somehow people like Martin initiated this divide. But one thing I would ask the revisionists is this, would they seriously opt to go and live in that environment? To grow up in it and raise a family under the heel of British militarism? Could they honestly guarantee not to oppose it by force of arms?

He may not have initiated the war but he was a driving force in concluding it, with particular emphasis on securing the best possible deal that could be achieved for Irish people in the North-East counties. Now, Catholics aren’t burnt out of their homes or denied jobs; they aren’t tortured or assassinated by SAS hit-squads; they aren’t chopped to pieces by the Lenny Murphy’s of this state; and they aren’t afraid to achieve big things in education or life. So it would be unfair to forget those who helped bring about this reality, by any means necessary, at that time. For within the Irish psyche, there are forces in this world mightier than parliamentary majorities, and a vision guided by the human heart is a very powerful weapon. Former Tory Cabinet Minister, Enoch Powell, once said that the “freedom to be an independent self-governing nation is the highest political priority and one which any price is worth paying.”

Those who seek to ridicule the deceased for his past efforts have many a political skeleton in their own closets. Mr Kenny is only able to sit and legislate in a Dublin parliament due to the intensity of a prior IRA campaign. Likewise, those who were in the security forces engaged in pro-state terrorism and counter-insurgency warfare against anti-state radicals and the nationalist community at large. Lord Tebbit was a member of a government which used enormous brutality against striking miners, while backing the fascist regimes of Pinochet and Pol Pot (which exterminated many of their own citizens). So opposition to violence is a busted flush with these old revisionists. The key difference is whether violence was used to benefit people generally or to oppress them. And I don’t think the wars in Iraq, Afghanistan or the Falklands did much by way of benefitting our fellow man.

When the British Government finally had the nerve to impose power-sharing on the Unionists, I often thought it would collapse. The sight of a former IRA Commander doing business with Ian Paisley stunned the world, and in a good way. People realised, the age old adage, that if you generally stopped people from holding office due to their past, or over adultery, addictions, war and so forth, then you would have no government! As Mr. Clinton and Mr. Blair well know. The real pertinence is what they do with their office and it’s hard to find anything critical about Martin’s tenure personally.

He came a long way and made power-sharing work longer and better than both Seamus Mallon and Mark Durkan before him. The Assembly under McGuinness and Paisley was a far nicer atmosphere. Old battles became wars of words and former foes ended up unlikely friends. It was very important that that ethos sustained because it provided many people from the Protestant/Unionist/Loyalist community with the reassurance that, despite decades of Unionist misrule, under republicans in office they would know no such injustice. Tony Benn once remarked in the 1980’s, in a sermon on the mount, that all these great anti-colonial leaders are initially jailed and branded as “terrorists”, but end up having tea with the Queen as world statesmen. And what a prophetical judgement that turned out to be. He lived to see it realised.

People generally seem to think that those who are younger tend to be more radical. But whether it’s Varadkar, Coveney or Michael Martin, Mr. McGuinness was to the left of them all on absolutely everything. The greatest epitaph to him would be, once and for all, to rid this country of foreign domination – for as that former “terrorist” George Washington once opined, “an attachment of one country to another is the most baneful foe of republican government.” Ultimately, Martin McGuinness said what he meant and meant what he said; His arena changed but his principles didn’t. And you can’t ask for more than that. Derry has lost a patriot and Mother Ireland has lost a son.
-To his wife, children and wider family I say this, with the passing of each new day in this life is one step closer to seeing him again in the next.

28 Responses to ‘McGuinness The Man: His Life & His Legacy’ by Donal Lavery