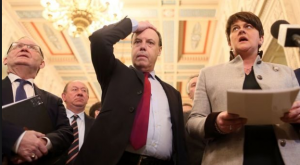 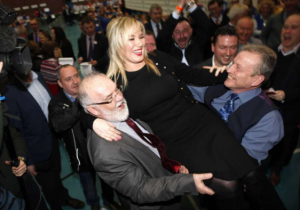 “We had a successful election”.

I don’t think so. His first statement he supported by pointing out that the DUP vote was up in every constituency throughout the north. And they’ve emerged as the biggest party, if only just. That’s not bad. In fact Gregory has grounds for calling it successful. Except that success or failure is measured not just in how well you have done, but how well others have done. As Gregory himself conceded, Sinn Féin had “a very successful election.” So if you do well but your opponents do better, the normal conclusion would be that you didn’t do so good after all. If you start with a 10-seat gap between you and your main political opponents and end with 1 seat between you and your political opponents, it’s hardly what you’d call a “successful election.”

In the second statement, that you can’t be worried about what happened three days ago, again Gregory is right, if you see “worry” as being angsty over what lies ahead. But  you can worry, and worry a lot, about the consequences of an event three days ago. And for a certain kind of unionist mindset, it is of course very worrying.

Why, Virginia? Because we now have, in hard percentages and seat totals, the concrete evidence that the nationalist/republican tide in the north is on the way to overwhelming unionism. We’ve been living with promises for a long time – remember when Mitchel McLaughlin of Sinn Féin, usually so clear-thinking and realistic, suggested that there could be a united Ireland by 2016? Before Friday last, lots of people were rolling their eyes and sighing over that kind of talk.  Now, with the DUP having handcuffed itself to the disastrous Brexit machine, and the clear majority of people here being firmly opposed to Brexit, big change is in the air.  With the reimposition of a hard border here, not to mention Scotland becoming more and more agitated at attempts to handcuff her to the Brexit doom-machine, change is in the air. The future of the UK, whether in economic or constitutional terms,  looks at best bad and at worst disastrous. . The future of partition in Ireland looks to be somewhere on the same scale.

‘Any Chance of Parity of Esteem Now?’ by Joe McVeigh
‘Who Fears to Speak of Fairness and Equality?’ by Catherine Kelly