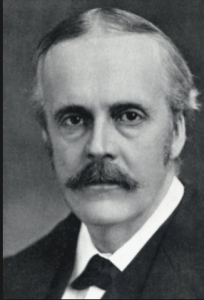 A former Tory Prime Minister and serving Foreign Secretary was once asked what his intentions were in signing away the land of Palestine to Zionism. He responded that he wanted to establish “a loyal little Jewish Ulster in the Middle East.” The man I’m referring to is of course the occult obscurantist and philosopher, Arthur Balfour, who penned the notorious ‘Balfour Declaration’. Previously, he had been known as “Bloody Balfour”, for his iron fist approach towards Irish resistance against British militarism when Chief Secretary of the island. Subsequently, it was that same imperial government of his which partitioned Ireland, under David Lloyd George’s premiership.

But what of the man? Balfour was one of the staunchest opponents of Irish Home Rule, commanding the House of Lords to veto it when he was Opposition Leader in the Commons. The Liberals once opined that the Lords might as well be “Mr. Balfour’s Poodle”, as successive governments fell over failure to resolve the Irish question. Never a fan of the Royals personally, he was loyal to the Crown as a state institution and preservation of authority. His relative, Lord Cranborne, is one of the closest Tory fraternisers with the Unionists these days.

When you walk past some Loyalist estates now and see Israeli flags flying, it can be a bit confusing to anyone who isn’t local. After all, one Israeli President was an Irishman and most Jewish people the world over have republican sympathies. But it has nothing to do with the Judaic faith; this is about Jewish nationalism – one is a religion and the other is a racial identity which desires a sectarian nation-state. The people in Israel harbour no ill-feelings at all against citizens of Ireland, that’s a fact. Ireland has never mistreated Jewish sons or daughters throughout the years, offering sanctuary from the pogroms and European fascism. Balfour by contrast, was passing legislation as Prime Minister to rid the UK of Jewish immigrants and refugees. He cared nothing for their well-being and less still for their freedom of religion.

But his comments on the state he created resonate well within the Unionist mind, which shares with the Israelis a “settler psyche”, reinforced by a “siege mentality”. Both claim to be a majority in an area surrounded and inhabited by a majority of indigenous people. Both claim to have a “civilising” series of effects when the reality is as attractive as vomit. The present Israeli government is easily the most right-wing and fanatical in the history of that state; gathering ideas and an impetus for oppressive legislation and draconian security measures from the Special Powers Act that upheld the ascendancy of the Orange statelet here.

I was in hospital over a year back and the doctor treating me for a gall-bladder operation was Palestinian, shedding tears when confiding in me that the medical teaching hospital in which he trained was blitzed by past Israeli bombardment. He dried his eyes and said “If even two or three more countries were as committed to the Palestinian cause as Ireland is, we would have had justice a long time ago.” One thing which all the main parties in the South and some in the North agree on is that Israel’s treatment of the Palestinians is both brutal and appalling. Hiding behind the pseudo-cry of anti-Semitism, the Israelis are systematically ethnically cleansing the Palestinian population as a means of consolidating their gangster state. It makes it all the more uncomfortable to find that many of their victims generally tend to be both innocent and children/elderly. Shooting and slaughtering vulnerable human beings as a psychological deterrent against those who may consider bearing arms against this repression.

Now, anyone who analyses the make-up of the American media or financial sector or militarist interests, inevitably discovers a concentration of Zionist sympathisers. People and groups who exert an unhealthy and undemocratic influence over American foreign policy, with few checks and balances. But talk to the mass of Americans and they bare no such affections. Indeed, the only other country which has anything close to this sort of persuasion in the most powerful nation on Earth is Ireland – due to close historical and familial factors. So it stands to reason that the only country on Earth which can unilaterally confront and expose the fanatics in Israel without fear of retribution is Ireland.

The truth also is, Israel came about as a result of Zionist terrorism, including the murder of British soldiers during the Mandate for Palestine era. And just like with Ian Smith and the Rhodesians, the Israelis will discover that both the British and Americans will abandon them once their own domestic/economic circumstances alter. This underlying fear haunts the Unionist mind also; that their principal “ally” will in time administer their state’s death certificate. That the things which make us strong in turn make us weak. The violence descending from the Palestinian and Arabic side is evidently more a symptom than a cause of the underlying crisis which exists there.

Like another famous Irishman, when I want to know what the Irish people think about something, I look to my heart. And I think it’s about time that more and more people lobbied their MLAs and TDs for an official, all-Ireland body concerned with justice for Palestine. Asylum must be granted to a much greater degree and we need to train more Palestinians as doctors and nurses to alleviate the carnage. We also need a public organisation funded by the Irish people and made up of  Irish people, which can press Ministers on areas of development, policy and networking surrounding this critical issue. For in the court of world opinion, where the rights of one people should be those of all peoples, there sits other and more decisive judges than those imposed by Israel.