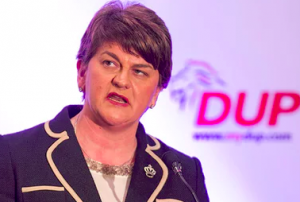 When I first noticed the former First Minister wearing a crown on her lapel I did not pass much remarks. I thought it was just for some special occasion like her queen’s birthday. I have noticed since then that this badge is a permanent fixture on all her jackets –an ongoing public expression of loyalty to her Majesty who still claims jurisdiction in this part of Ireland. To prove what a true blue she really is, Ms Foster never appears without her crown. Is this devotion to the Royals not a bit cringe-worthy? Maybe not, if you are a hardliner unionist like Arlene.  On the other hand from now on it must further lessen her chances of appealing to republicans and the wider nationalist community -that is if she is ever to be proposed as First Minister. It surely must make it more difficult for her to be seen as serving the whole community when she is constantly reminding us that we are subjects of the crown.

What message is Arlene sending out to the Nationalist/Republican community with the ever-present crown on her jacket? I think the message is: ‘We unionists are a superior people. We are, unlike you lot, loyal subjects so we do not have to treat you disloyal people with respect or parity of esteem’. I think the longer she goes around wearing the crown the more she is making herself unacceptable as a leader with whom republicans, now with one seat less than her DUP, can do business. The longer she objects to standing aside the more unlikely she will be accepted as first minister in any new  Executive. And, of course, there is the issue of ‘the crocodiles’.

In the 1998 Agreement there was an acceptance that there are two different traditions in Ireland –one which believes in reunified Ireland and is entitled to promote and express that desire. The other tradition continues to be loyal to the Crown and  they are entitled to express that loyalty. But of course all of that must be done with respect for the other tradition. It must be done sensitively. That did not happen while Ms Foster was First Minister.

The GFA stated that there would be no change in the constitutional position until a majority in the north vote for a change in a border poll. That day is much closer now than it was last week. The future of the 1998 Agreement is in doubt because of the unwillingness of one side to work it. The GFA is, however, the best way to move forward because it contains the mechanisms agreed for the changing situation. There are more positive noises coming from the DUP today, Sunday.

The rights of the loyalist/unionist tradition are accepted by Nationalists/Republicans in the 1998 (Good Friday) Agreement. The problem is that many on the loyalist/unionist side do not fully accept the rights of the pro-Irish community. They refused to implement the GFA in full. The DUP in the last government did not accept the right of Nationalists/Republicans to parity of esteem and equality, nor did they accept the rights of Irish speakers. Sinn Fein has tried very hard not to be negative and to continue to reach out, that is until the RHI scandal and the treatment of Irish language speakers made their position untenable.  I am sure that, now the election is over, Sinn Fein will continue their policy of reaching out and holding ‘uncomfortable conversations’ with all shades of unionism. I notice that Michelle O’Neill has repeated the determination of SF to find a way through all of this. As well as serving the whole community in government they will continue to work politically for reunification in accordance with the principles of the 1998 Agreement.

‘Who Fears to Speak of Fairness and Equality?’ by Catherine Kelly
BRITISH INTELLIGENCE AND ITS FRIENDS by Donal Kennedy

5 Responses to ‘Wearing the Crown’ by Joe McVeigh