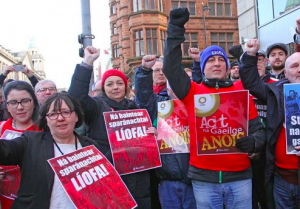 “Restoration of public confidence in the political process, reestablishment of the political institutions; and future stability now depends upon implementation of the agreements, equality and respect for all in society and adherence to the GFA.” – Declan Kearney

An equality ‘revolution’ in the north of Ireland has been bubbling just below the surface for some time now.

In the past few months its popular dynamic has become central to the political process.

The political corruption of the Good Friday Agreement (GFA) and frustrated hope in the political process; financial scandals culminating in the RHI tipping point; DUP political arrogance towards republicans, nationalists and especially the Irish language; as well as the ambition of the Marriage Equality Referendum in the south; have all popularised the equality agenda, as never before.

The absence and denial of respect, equality and integrity within the political institutions, and towards wider society by the DUP has become a lightning rod for change.

The DUP has politicised the Irish language and made it symbolic in relation to respect and equality for the overall Irish national identity.

The huge momentum in support for an Irish Language Act now sits alongside popular support for Marriage Equality.

Support for both campaigns has refocussed attention on the importance of a comprehensive Bill of Rights in the north. All these issues, as well as legacy inquests and the British national security veto are at the core of the Stormont talks.

Sinn Féin contested the Assembly election on 2nd March on a platform that we would not return to the status quo of political corruption and arrogance, which undermined the political institutions and forced Martin McGuinness to resign as Joint First Minister.

Our position has not changed.

The political institutions will only have value again when they serve the needs of all sections of northern society and in the context of a rights based society.

That was the powerful message delivered by the electorate in the Assembly election.

As a result, politics in the north have realigned. The greater majority of the electorate voted for change.

It came against a backdrop of widespread community outrage.

The unionist political majority in the Assembly was ended.

The huge outpouring of grief at Martin McGuinness’ death became a further expression of that groundswell.

Martin’s funeral was the biggest republican funeral since the Hunger Strike in 1981. That was a testament to the unparalleled respect in which he was held as a republican leader, visionary and statesman.

So, when the republican family organised a state funeral in his honour, without the resources of a state, that event also became a mass mobilisation of republican defiance and determination.

Martin would have been proud.

This month marks the 19th anniversary of the Good Friday Agreement (GFA).

People of all ages and backgrounds have never been more engaged in political discussion since that time. And, that phenomenon is not confined to the north alone.

In the period of the week after the death of Martin McGuinness over 700 people applied to join Sinn Féin.

For many older people the unfolding political events are reminiscent of the civil rights era. Coincidently this year saw the 50th anniversary of the foundation of the Civil Rights Movement.

Now for those who were too young to have lived through that period, or who were not even born in 1998, today’s emergent equality ‘revolution’ in the north has become a latter day civil rights campaign.

There is an acute interest in the direction of politics and the current talks. But the message in the wider community is consistent, there can be no return to the status quo.

During March the first three weeks of Stormont talks ran out of road because neither the British Government nor the DUP engaged seriously on any subject, including legacy.

Towards the end of that phase the British Government attempted to negotiate unacceptable proposals on the Irish language for the DUP.

And the Irish Government failed to stand up for the equality agenda, or on legacy issues.

Both the British Government and DUP refuse to ‘get it’. Together they represent an anti-equality axis. That’s a massive problem and impediment to progress.

Now five weeks after the 2nd March election no progress has been made in the talks.

With the benefit of hindsight it is probable the two governments deliberately staged those three weeks of aimless talks in an attempt to take the ‘sting’ out of the election; dampen down public anger; and spook the parties into acquiescing to a later ‘agreement’ at any price.

Currently a familiar routine is shaping up half way through this two-week talks phase.

Both the British and Irish governments are clearly preparing the ground to impose a predetermined talks ‘agreement’ on a-take-it-or-leave-it basis which fails to implement outstanding and agreed legacy positions and falls well short of the minimum equality requirements.

The two governments’ plan is showing all the hallmarks of the failed Stormont House Agreement approach.

However, both governments and the DUP are “living in a fool’s paradise” if they think that will be acceptable.

This talks phase will only be successful if all participants get onto the same page and recognise our collective focus must be on delivering the equality agenda.

The reality is that the political process in the north will remain embroiled in permanent instability unless, and until, equality is placed at its core, and political unionism embraces the need for a rights based society.

The equality agenda is fundamental to the peace and political processes. It is the bedrock of a rights based society in the north. That is the best context from within which to develop a reconciliation and healing process.

Some sections of political unionism oppose equality. They treat it as a zero sum concept, and choose to interpret it as retreat for their constituency; rather than as an advance for society.

So, the equality agenda is too important to be left to the two governments and political parties.

Political unionism must not be allowed to place a fetter on its delivery.

Equality and rights are not up for negotiation. These belong to everyone and are the foundation of a truly shared future. This is not about orange and green, or contested constitutional aspirations. None of us have anything to fear from equality.

No section of this society, regardless of politics, creed, class, colour, cultural tradition or sexual orientation will be put to the back of the bus again.

A Bill of Rights; Irish language rights; marriage equality; an anti-poverty strategy; anti-sectarian hate crime legislation; social inclusion; cross-cutting objective need criteria; and the anti-racism strategy represent the free-standing components, and Programme for Government provisions which are central to the delivery of the equality agenda, on a time-framed basis; alongside complete implementation of all outstanding legacy issues.

These are the minimum standards which should define the existence of a rights based society in the north.

All of these positions constitute common ground for progressive political parties and wider civic society.

A progressive consensus with maximum participation should be developed as a critical priority, to advance this agenda for a genuinely rights based society.

Civic society, and particularly the labour movement and equality and human rights sectors, should be publicly and privately mobilising their significant influence towards that end.

As a matter of urgency the Irish Government needs to stop behaving as a junior partner to the British Government and to step up to the plate and publicly support progressive equality positions. It must decide over the next 8 days whether it intends to be compliant with the British Government/DUP game plan, and to collude with a reinvention of the status quo, which caused this current political crisis.

Sinn Féin will certainly not be accepting that approach.

There will be no return to the status quo.

Restoration of public confidence in the political process, reestablishment of the political institutions; and future stability now depends upon implementation of the equality agenda and adherence to the GFA.

That position is non-negotiable.

If a step change is not adopted by the British Government and the DUP towards the current talks within the next eight days there is only one option: another election should be called.