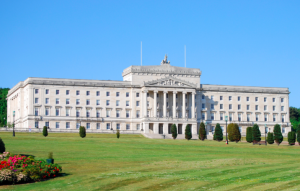 One of my parents was a Personal Assistant to the late Mr Paschal O’Hare, an excellent solicitor and former Assemblyman who left the SDLP over their pro-Brit leanings. Mr O’Hare, like Patrick Finucane and others, spent a lifetime arguing with Orange/RBP men in Judge’s robes in what can only be described as a rotten perversion of ‘natural justice’. Most of these men on the bench owed their appointments to the hegemonic Ulster Unionist government at Stormont, from after partition, who knew them from their membership of the same Loyal Orders. What the few Catholics who were appointed had to prove, time and time again, that they were beyond any reasonable doubt ‘loyal’ to the Crown – which is coded language for jailing members of their community for longer than their Protestant counterparts would.
When the Troubles started, it didn’t take long for the state to abolish the human right that was trial by a jury of your peers, and replace that with a single judgement before a Loyalist with a Whig on. Diplock courts sentenced people to horrendous stints in jail on the basis of; forced confessions (beaten out of people at gunpoint), intimidation, perjured evidence and “super-grass” finger-pointing (for state cash and protection). Let’s be honest, if you were a Catholic, Nationalist or a Republican, then you had no rights under the law – not even the most basic of all, the right to life itself. You could be jailed on the back of bogus evidence and circumspect charges, with little hope of appeal. Your life ruined before it has really began.

It’s true, that only a handful of security service personnel were ever brought before a British imposed “Kangaroo court” in Ireland. Many of the judges who presided over trials and investigations (like Lord Widgery with “Bloody Sunday”) were former military men themselves. You may remember the young 12 year old girl, Majella O’Hare, who was shot twice in the back by a British soldier in 1976; an innocent child on her way to church. And what comfort was afforded to her bereaved family? The charge was demoted from murder to manslaughter by the RUC, because the soldier claimed an IRA sniper was in the area (despite no evidence of that). And to add insult to injury, Lord Justice Sir Maurice Gibson OBE, acquitted the murderer entirely – after he and his patrol were verbally abusive to Majella’s father as she lay dying in his arms by the roadside. Dr Liam Fox and the Ministry of Defence have since had to apologise for the murder and now accept that no evidence ever existed of an IRA sniper nearby; that it was fabricated lies to help enforce an amnesty for massacring Irish people by Crown forces, in and out of uniform.

This wasn’t the only occasion on which Lord Maurice Gibson overlooked the cleansing of Catholics. When three unarmed men were killed after the RUC riddled their car with bullets at a Lurgan checkpoint; he achieved legal notoriety across the world. Gibson, looking the crying families in the eye, handed down an acquittal to the murderers and actually applauded them for bringing the deceased to “the final court of justice.” Even the vehemently anti-republican government in Dublin at the time protested at such apparent bias and commending of state-sanctioned murder against the nationalist community. Gibson was allowed to go on and on absolving the British of their sins, until he was brought “to the final court of justice”.

This was the reality of British “justice” in Ireland; where mercenaries, either imported or home-grown, could slaughter you and your family without any inhibition from the state. Those solicitors brave enough to challenge this were faced with the state deterrent that they themselves would be “fair game”. And let’s be honest, the bodies which we presently have at the minute for investigating these crimes are not pro-republican, many of their personnel would be of a unionist perspective and yet even they are having to conclude that what went on here was shocking. The reason the militarists within the DUP (including many former RUC and UDR men) and Ministry of Defence don’t want to face up to this reality is because they know that if the public and the world knew the full details of the Orange syndicate and Loyalist murder-machine they were operating, people might change their mind fast on wanting to ever be citizens in or associated with the British state. They know that the North of Ireland was to the Crown what the “killing fields” of Cambodia were to the tyranny of the Pol Pot regime.